I have agreed to help a Daedra called Lyranth attack the Imperial City Prison, which has been overrun by others of her kind. I can free the mortal prisoners held within, but my goal is to eliminate the Daedric invaders. 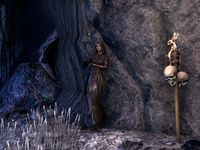 When you enter the prison, you'll find that it's taken quite the beating. Lyranth will tell you that she needs your help to kill the Flesh Sculptor and the Lord Warden of the prison. You agree and delve deeper into the complex. Feel free to liberate the prisoners in the cells as you make your way through the Imperial City Prison. There should be a lever by every full cell block that will open every cell on that block.

Defeat the Overfiend and the Harvester that is summoned to aid him. Then cut your way through Daedra until you reach Ibomez Flesh Sculptor. After offing Ibomez, Lyranth says that the Gravelight Sentry is the only thing between you and the prison's new Warden. Navigate the tunnels between the prison, defeat the Gravelight Sentry and the Flesh Abomination, then take on the Lord Warden's Council.

You learn that Lyranth bears a grudge against the Lord Warden, as he trapped the living essence of her clan members to make a set of armor for himself. Defeat Lord Warden Dusk, free Lyranth's clan members, and watch as Lyranth traps the Lord Warden himself inside of a shield. She thanks you for your service, but tells you that you may want to leave, seeing as how the prison is still owned by Molag Bal, and someone needs to run it for him.

Take your talking shield and claim the reward for this quest.

This Elder Scrolls Online-related article is a stub. You can help by expanding it.
Retrieved from "https://en.uesp.net/w/index.php?title=Online:Summary_Execution&oldid=2351607"
Last edited on 2 March 2021, at 21:28