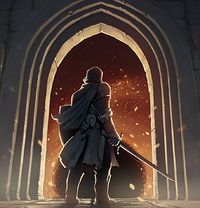 A portal to the Abyss

The Abyss is a mysterious realm of Oblivion consisting of a never-ending series of rooms and corridors, both real and unreal at the same time, which together form an endless dungeon.[1] Few have survived exploring the infinite reaches of the Abyss, and none have conquered it.[2] It is said to be linked to the Ayleid lich king, Celemaril Light-Bringer. However, Celemaril is not responsible for its creation.[3]

Circa 4E 180,[4] Celemaril was released from his magical imprisonment in the Ayleid ruins beneath Rivercrest. Soon thereafter, a portal to the Abyss had appeared in the entrance of an old crypt just outside of Rivercrest.[5]. A madman named Theodor Gorlash (seemingly Lord Sheogorath in disguise) took an interest in the Abyss. He coined the title, "The Abyss", and encouraged the Warrior to explore its depths. The Warrior entered this portal and embarked upon expeditions deeper and deeper into the Abyss, fighting through waves of enemies and returning to the surface with many treasures, including a number of legendary artifacts.[1][6]

The rooms within the Abyss vary in appearance, with each floor of the dungeon containing a different architectural style and increasingly difficult enemies. The rooms can take on the appearance of natural caves, ancient Ayleid ruins, and Imperial forts. These rooms are inhabited by an endless number of various enemy types, including mortals, Daedra, goblins, Tamrielic creatures, undead, and even dragons.[6]