A few days after completing A Plot Revealed, the Arch-Mage will inform you that the Council is in ruins after the events of the previous quest (after having just fallen into disarray upon being informed of the return of Mannimarco). As a part of this more recent upheaval, two artifacts, the Necromancer's Amulet and the Bloodworm Helm, were removed from the University by Caranya and Irlav Jarol, respectively. Having continued misgivings for the safety of the items and their current caretakers, the Arch-Mage wants you to retrieve the items back to the University for safekeeping.

Being approximately equal in ease and difficulty, length and reward, and being unable to proceed until both are completed, there is no clear advantage of doing one or the other first and so the choice of which to complete first and which to complete second is up to you.

According to Caranya, she took the Amulet to Fort Ontus in order to keep the University and Imperial City safe from being a target. The Arch-Mage will mark the location of the fort on your map, which is to the southwest of Chorrol.

While the Arch-Mage does not disagree with Caranya's claims that the University and the City would be safer with the artifact elsewhere, he has reservations about the genuineness of her intentions. 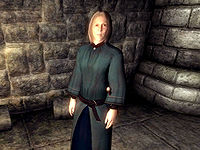 Mysterious mages have occupied the fort

When you get to the fort, the apparently friendly mages inside will assume you are there to join their ranks. They will thusly direct you straight to Caranya, who can be found in the center of the Ontus Understreets. When you get to her, Caranya will reveal that she is a necromancer and that she desires to recruit you to her movement. After it becomes clear that neither side will agree to the other's wishes, she attacks. Because Caranya is unarmored and allows you to get near her, she should not prove to be too difficult an opponent. She does however have powerful spells that could cause some serious damage when used in rapid succession, so using Silence and Resist Magic against her is recommended. Another strategy is to initiate the fight, then retreat back through the gate. You may then safely use ranged attacks, as the gate makes her spells inaccurate. When she has been killed, take the Necromancer's Amulet from her body.

The mages of Fort Ontus will now reveal themselves to be Necromancers and attack on sight. Individually, they are far weaker than Caranya, but can be deadly in groups. Killing them one at a time before you face Caranya is one way to avoid complications here.

After finding your way past the necromancers, return to the Arcane University and speak with Traven to complete the quest. If you have also completed The Bloodworm Helm, per usual, Traven will direct you to Raminus Polus for advancement to the next rank.