The Army of the DeadEdit

Speak to the Quester, who says:

"I am (Quester's name) of this knightly order. I have a most dangerous quest (player's first name). You are one of the few that could possibly take it on. A lich is raising an army of undead. We need someone to go in and put a stop to it."

The Quester goes on:

You are brave indeed. The lich has made (dungeon) into its lair. Go there and destroy the foul thing. In (time limit) days we will send out someone else, should you not return.

"I understand, (player's name). This is too dangerous even for you. There are one or two other heroes that might be able to pull this one off. I'll go ask them." 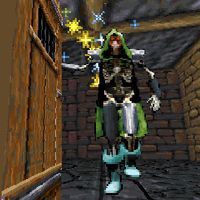 The lich wants to destroy the region 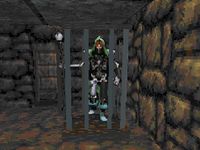 Do not underestimate the danger of this situation

Head to the dungeon named by the Quester. Enter it, then find and destroy the lich within. Beware, as there is a 33% chance that you will come up against an even more dangerous Ancient Lich. Regardless of its type, when the lich is destroyed a message pops up saying:

The lich is dead. Without his magical support, the army of undead will return to the grave.

Loot the lich's corpse to find a note, which reads:

...have found a clue at last!
I dare not even name the lost
artifact of ancient power that
it points toward. It is too
late for me. I will die down
here in (second dungeon),
lost among it's dark passageways.
First, I will hide my clue.
If I cannot...

Reading this note triggers the start of the optional quest, but before embarking upon this adventure, you must report back to the Quester or you will fail your original quest when its time limit expires.

Upon reporting back to the Quester, he heralds:

"Hail to the hero, (player's name)! Well done! You name will be recorded in all the histories."

This ends the quest you were given by the Quester. However, even though the quest is complete, you will not be able to receive another quest from him until the original time limit has fully expired.

A lock of the wizard's hair

Take your leave of the Quester and head to the dungeon named in the lich's note. Search this dungeon, and you will eventually find a wizard living within. Speak to the wizard and be told:

"A pox upon you for disturbing me (player's name). (Oath), of course I know your name, and no I'm not going to tell you mine. What's the use in bein' a wizard if you can't know things normal folks don't. I also know why your here. You want (Chrysamere), except you didn't know it by name, did you? The only way you're gonna get it is if you do me a favor first.

"You trudged all the way down here to speak to me and now you don't want to continue? Inconceivable! Get out of my sight!

The wizard will not bother you further, but you will be unable to continue your search for the artifact. In addition, you must now wait until the quest's second time limit has expired before you can get another quest from the Quester.

"You see, I don't actually know where your artifact is. My great grandfather once sought for it. According to family history, when he found it the Mages Guild took it from him and hid it somewhere. His spirit has never rested easy since. If you have this lock of my hair with you when his spirit is put to rest, he may tell you where to find what you seek. He haunts (third dungeon)."

Armed with the lock of hair, head to the dungeon named by the wizard. Enter it, and find the specter, a wraith, that haunts its halls. Put it to rest by destroying its spectral body. If you have the lock of hair in your inventory, the freed soul will speak to you, saying:

"You hold a token of my lineage, a bit of hair from one of my descendants. Know ye that I have wandered these halls for long decades waiting for this sign. Go to the Mages Guild in (town). There you will find what I once lost." 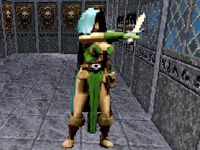 The Mages Guild would like to keep their artifact

Head to the town named by the spirit of the wizard's ancestor, then locate and enter its Mages Guild. If you arrive outside the guildhall's opening hours (11:00 to 23:00), you will have to pick the lock or cast an Open spell to enter. Find the artifact within, but be prepared to take on any battlemages that may be guarding the artifact.

The artifact will look like some other rusty dungeon equipment lying on the floor. If you use "Info Mode" (by default the F3 key) you can check any rusty equipment that you find; if you have found the artifact it will tell you, for example, "You see a Chyrsamere." Pick it up to end the quest.