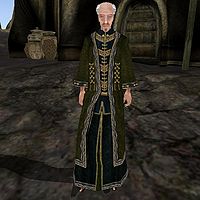 Louis Beauchamp outside the Mages Guild

If you talk to Louis Beauchamp outside the Mages Guild in Ald'ruhn, he will tell you about his enchanted airship, which he sent a crew on up to Solstheim, who haven't returned. He will ask you to go and find out what happened to them, and try to recover the Amulet of Infectious Charm that they were looking for. Also, if you talk to people in Solstheim about the latest rumors at all, you may hear the rumor about an airship that crashed recently in the wilderness of the Island. You won't get any specific locations or directions so don't worry about it too much until you actually find the airship in your travels.

The airship crashed near the center of the Island, just west of the Altar of Thrond (exact position is -190800, 194600 and it's marked on your paper map). Bits of Dwemer machinery (in various degrees of functionality) are strewn about in the immediate vicinity, and some of the supply crates still have items inside. Take the Airship Captain's Journal sitting on the ground next to Captain Roberto Jodoin's corpse (he's lying on a cot with a burning torch stuck in the ground immediately in front of him).

Find the Amulet of Infectious CharmEdit

The barrow you need to search is found in the area marked Hrothmund's Bane on your paper map, slightly north of the airship wreck. The local map will show the outline of a wolf, whose 'eye' is the entrance to Hrothmund's Barrow. Speak the code phrase Ondjage (selecting any other phrase will seal the barrow forever) and enter. The barrow itself is small; the opposition consists of one Draugr and one Bonewolf. You'll shortly find Hrothmund's Axe (which you cannot pick up, and is later used in The Mead Hall Massacre quest) buried deep in a stone, with the Amulet of Infectious Charm lying next to it. The amulet fortifies personality while making you more susceptible to common diseases and draining fatigue, potentially making it more valuable as a boost to your personality than the gold reward would be useful.

With the amulet in hand, head back over to Louis in Ald'ruhn as you wish. He'll profusely thank you and reward you with 1,500 gold for the amulet, or 2,000 if you also recovered the journal. Be sure to talk to him again afterwards to find out he has a hot date. However he is also suffering from a chest infection which is evident from the hacking coughs between every second or so word.