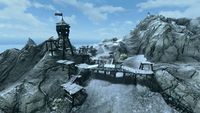 Moesring Pass is a mountain pass due northwest of the Temple of Miraak, inhabited by rieklings guarding the nearby Strange Vessel. 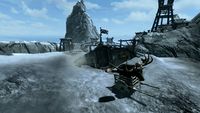 It is a pass high in the mountains, that rieklings have made camp at. It is the meeting point of three paths and has the Strange Vessel in the middle. It is home to four rieklings including one mounted on a bristleback. There is a walkway over the path that joins two paths coming from the south and from the southwest. A second walkway is over a path that comes from the northwest. At either ends of the walkways are lookout towers. The tallest of these is directly west of the strange vessel. A riekling is on both the walkways, with a third slightly further to the southwest hidden in a bush. The mounted riekling is further uphill to the north beside a campfire.

There is a mounted elk head in a cart in the middle of the pass. On the head is a chitin helmet and a cave bear pelt. A few paces east of the cart is a riekling hut, with a sack to the left of the entrance. To the north is an end table on it's side with an East Empire Company Strongbox on top and a pair of leather boots beside it. Further uphill there is the campfire with a kettle next to it. The kettle containing a fillet of horker meat, a woodcutter's axe and a honey nut treat. Behind the fire is a riekling tent containing a bear pelt, a knife and a sack. To the left of the tent is another riekling hut. To the south of the fire are three barrels, on one is an iron dagger, the next has a piece of charcoal and a fork on top and the third has a belted tunic on top. Finally to the right of the door into the strange vessel is a sack. 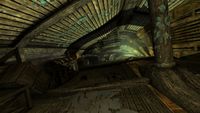 Inside the strange vessel

Inside the strange vessel you can clearly see it is upside down. It is a combination of Dwemer architecture and riekling paintings over everything. It is lit by a goat horn on a stand beside the door and by a typical Dwemer light on what is now the floor. There are crates and barrels along the eastern wall and by these is an unlocked chest. On the floor is a pair of shoes, a pair of leather boots and a set of hide armor. South of the entrance is a skeleton that can be looted for a few gold. and behind this is a flight of stairs that can't be used and behind these is an adept locked chest and another barrel.