Solstheim boasts two unique types of undead creature: the Bonewolf and the Draugr. In addition there are several new types of Skeleton, including the especially-powerful greater skeleton champion. 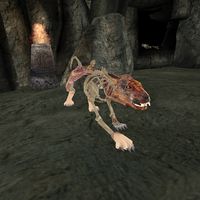 "Foul beasts, not of this earth. These are creatures brought into existence by black magic. They are a mockery of the true and good wolves that roam this land."— A Skaal

Description: An undead type of wolf haunting the resting places of the old graves on Solstheim.
Found: Often found in Barrows. 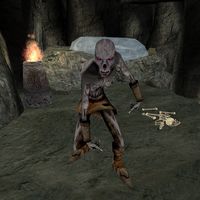 "Once, they were warriors much like the Skaal. Trapped and hungry on this island, they feasted on the flesh of their fallen comrades, which is a crime against nature. The All-Maker cursed them with undeath, forever doomed to walk the land in search of more of the flesh of man to consume." — Korst Wind-Eye

Description: This undead† type of northern barbarian haunts the resting places of the old graves on Solstheim. Their mad search for flesh makes them fierce fighters, resisting many kinds of attack.
Found: Often found in Barrows.

†Draugr are not actually considered undead by the game and are instead set as creatures. As such, Turn Undead spells will not work against them.

Skeletons already existed in Morrowind but several new types have been added.