The Mead Hall is under AttackEdit

During your travels, you may have heard of, or passed by the mead hall of Thirsk, just east of Lake Fjalding. During the Skaal test of Strength, if you enter for a quick drink, you'll find most of its patrons are dead. Speak with one survivor, Svenja Snow-Song, to find out that they were attacked by a terrible monster called Udyrfrykte, taking with it a severed leg of a patron. This mythical beast of some sort is rumored to make its home near Lake Fjalding.

Svenja pleads with you to take up the task of tracking and killing the monster. Be sure to loot anything you need (including a decent pair of magical boots called Paws of the Wolf-Runner), as the corpses disappear once the hall is repaired. 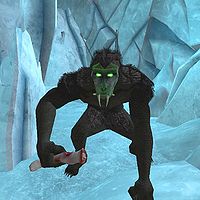 The Lair of the MonsterEdit

The beast's lair is nearby, west of Thirsk, at the southeast corner of the frozen lake. The lair is small and you'll find the creature at the end of it. The Udyrfrykte looks strange and rather frightening, almost like a big gorilla in a mask... ...almost. Its weapon is a Severed Nord Leg. It isn't as tough as some creatures you find during the main quest, but still more powerful that anything you'll find in the wilderness, so use caution as necessary. Be sure to loot the creature's heart as proof that you killed it (you can leave the severed Nord leg behind, unless you really want it). Be sure to check around the cave for a few trinkets, nothing special.

Return as the Hero of ThirskEdit

Return with the Heart of the Udyrfrykte to Svenja in Thirsk. You'll now find her outside the boarded up mead hall, closed since the Udyrfrykte killed nearly everyone. When you talk to her she'll take the heart automatically but there's one more task she wants you to perform. She asks you to find the barrow of Hrothmund the Red, first chieftain of Thirsk, and lay your hands upon his axe which lies therein. She mentions that while you're away she will start repairs on the hall. If you ask her for a little secret at this point, she will tell you that the name of the wolf that killed Hrothmund is "Ondjage". This is the password you will need to enter the barrow.

But wait, there is moreEdit 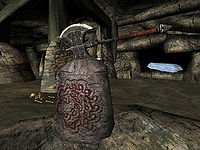 Hrothmund's Barrow can be difficult to find if you don't 'get' the clue about it being in the eye of the wolf. You're looking for a group of large rocks that are shaped like a wolf, with the entrance in its eye. A complete description is given in The Patchwork Airship quest as the Barrow is involved there as well; you may also have acquired the barrow's password during that quest. Activate the axe in the barrow to receive a journal entry and a blessing.

When you return to Thirsk, the mead hall has been repaired and you are welcomed as the new chieftain. You can relax in your new quarters upstairs which includes a gift from Svenja, the magical Nordic long blade Clanbringer.

This is not the end of your business at Thirsk, one final glory remains. Speak to Bereditte Jastal upstairs to receive a new copy of Thirsk, a History, which now includes your exploits in becoming chieftain.