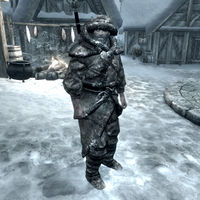 Wulf Wild-Blood is a Nord warrior living in his house at Skaal Village. He is a master trainer for Two-handed.

He wears a Skaal coat with matching boots and hat. He carries an iron battleaxe and a hunting bow, his house key, and a selection of lower-class items and gold. If you've found his brother and finished the quest Filial Bonds, he will carry his brother's letter with him too.

Wulf may greet you with "I am called Wulf Wild-Blood. I am First Hunter of the Skaal.", "Every winter, the ash from the angry mountains creeps closer.", "I know a warrior when I see one, friend of the Skaal. You have the heart of a mighty bear.", "If you would hunt a wolf, then you must know how the wolf thinks and moves. You must become a wolf yourself.", or "The blood of wolves runs through your veins, Skaal-friend." if A New Source of Stalhrim is completed. He may end conversation with either "Remember to hunt only when you have need." or "May your hunts always bring you game."

Wulf is a skilled and well-respected hunter in the village. He will tell you what kinds of game he hunts: "Deer, bear and horker provide most of what we need for skins and meat. Sometimes, when the wolves grow too bold and threaten the village, we must hunt them to cull their numbers."

If asked, he will tell you what else a First Hunter does. "When we stalk large game, I lead our hunters in tracking the beast. It is also a way of saying that I am the most skilled hunter in the village. I doubt that an outsider could truly understand, but I hope my words have helped to answer your question."

He will also share some wisdom about hunting with you: "The first piece of wisdom I teach to any hunter of the Skaal is to ask the simple question, should I truly kill this beast? We take only what we need, and so we preserve the oneness with the land." He will also explain the concept of "oneness with the land", should he be asked. "The Skaal hunt not for sport, but to survive. We believe that all creatures have a right to live as they will, and when we take what we need from them, we thank the beast for its gifts. The less we disturb the land and the beasts within it, the more we respect the wishes of the All-Maker."

When in combat, Wulf Wild-Blood may taunt with "You're a fool to test me, outsider.", "You will not break me, outsider.", or "I have slain more dangerous creatures than you!" to non-NPCs.

Wulf is one of the Skaal villagers to be found working at the Wind Stone. When you free him, he can be found saying either "I don't know what spell you freed us from, outsider, but I thank you.", "I pray to the All-Maker that whatever this was, it doesn't happen again.", "My road takes me home, outsider. Hunt well.", or "Forgive my impatience, but I must get back to the village right away."

Wulf Wild-Blood will also witness the death of the village shaman, Storn Crag-Strider. Wulf will be fraught with disbelief, saying, "No, it cannot be..." He will also mourn the dead shaman. "Return to the All-Maker, old one. The Skaal will never forget your sacrifice." When speaking to him, Wulf may tell you either "He has returned to the All-Maker. He is at peace now, no matter what that evil thing may have done to his body." or "Go and avenge him."

To begin this quest, you must ask Wulf how he became First Hunter. He will tell you, "In days past, my brother Torkild and I would share the hunt, but that was... long ago." You can ask what happened to his brother, to which Wulf will say, "I wish I could tell you." He will describe Torkild: "He had a wild gleam in his eye, more than most. In my darkest times, I fear he fell in among the werebears of the glacier." Asking him what a werebear is will net you Wulf's negative view: "Twisted beasts, a curse of Hircine. True bears are noble and great creatures of the wild. But the daedra have no skill for creation, so they befile the All-Maker's workings. I've heard tell of men who, by curse or by heart's desire, become transformed into one of those vile things. It is a pitiable fate. And one that I fear has fallen to my brother." Wulf also has an idea where his brother might have gone. "He set off from here so long ago, it's hard to say. Could be in Hammerfell for all I know. If you happen to cross his path, be wary. He was a fierce warrior as a man." He will also warn you about Torkild's abilities: "If he fell prey to his more bestial side, he could be deadly."

You can further inquire of Wulf about why he thinks his brother became a werebear. "He never felt the call of the All-Maker as I do. As we all should. We seek to live in peace with the land, but he had an eye for dominance and strength. For unnatural strength, you need look no further than the beasts of this island, mangled by the daedra. It's not a fate I would wish on anyone. And not what I wanted for my brother."

When you find Torkild, you will be forced to kill him as he turns into a werebear. You must take his letter to Wulf, who will confirm that the letter was indeed written by his brother. "This is by his hand, for certain." He will continue, "It looks like I was right. He was taken in by that... Where did you find this?" You can tell him the truth, that Torkild became a werebear, and Wulf will reply, "I... I understand. That's not an existence I would wish on anyone. I hope you gave him a swift end." You have three possible replies:

"What was left of him."
"Good."
"Hard to be sure. He put up a strong fight."
"Well, the truth is my brother really died long ago."
"I just got out of there as fast as I could."
"I didn't take you for a coward. But until we know the limits of our courage, we don't really know ourselves."

Whichever dialogue option you choose, Wulf will end with his thanks: "Thank you for setting my mind to rest. Now I can hope the All-Maker will show mercy to him in the beyond. Let me impart some of the wisdom of the Skaal to you. You've done me a service; I will do you one in kind." He will reward you with one point in Archery, Block, Heavy Armor, and One-handed.

Wulf may have some random conversations with Deor Woodcutter:

Deor: "There was a great brown bear on the slopes the other day. I could swear by the All-Maker that it was watching the village."
Wulf: "Yes, I know the one you saw. It watches us each night, always moving closer. As the ashfall worsens, the land and water are poisoned. The animals have less to eat and become desperate."
Deor: "We had better do something about it, then."
Wulf: "It makes my heart heavy, to think of killing a beast when we have no need of its hide or its meat. That is not our way. The bear might find food elsewhere. We will leave it alone."

Deor: "I have seen more wolves and bears among the trees since the last dark moon. Something is driving them north into our lands."
Wulf: "The beasts are driven north in search of food. The ashfall in the south kills the plants upon which the small creatures feed. As the small creatures move north, the large ones that prey upon them must follow."
Deor: "If they grow hungry enough, they will turn upon us."
Wulf: "That is the way of things. We must be prepared. At least the hunting will be easier with the beasts so close."

Wulf: "Make sure that you save some wood from the pile."
Deor: "What for?"
Wulf: "One of our chairs is about to break. It will need to be mended with a new leg."
Deor: "Very well, I'll take a look at it later."

Deor: "I'm in your debt, Wulf. That bow you gave me is twice as strong as the last one I had."
Wulf: "It's not just the bow, Deor. Your arm has grown strong and your eye sharp. You've spent many days practicing your aim.The All-Maker favors those who work hard to hone their skills, as you have done."
Deor: "Then I will keep practicing my aim every day."