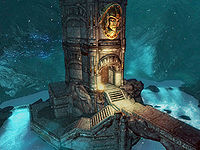 The Tower of Mzark is a small Dwarven tower in Blackreach. The tower can only be initially accessed from Blackreach. It is in the southwestern corner of the cavern, on a spire between two waterfalls. There is a stone bridge over the river which connects to the northern face of the tower.

The tower has an exterior, an interior zone, and the surface exterior where the lift is.

After crossing over the bridge, you will see a winding set of stairs going down to your left, as well as a door ahead which opens to a lift that will take you up to the interior of the tower. Proceeding down the flight of stairs, you will come across an unlocked chest to your right, along with two pieces of Dwemer scrap metal: a solid Dwemer metal and a bent Dwemer scrap metal. The chest will always contain either a piece of jewelry or an amulet of one of the Nine Divines. Other leveled loot may include more jewelry, gems, soul gems, and/or scrolls.

Continuing down the flight of stairs, you will reach the southern face of the tower, with stone arches and a Dwemer pipe overhead. There is a crimson nirnroot growing among some mushrooms here. If you continue to proceed down the stairs, you will eventually reach a stone platform raised slightly above the water between the two waterfalls. Towards the west of the platform is a short flight of stairs going down into the water. Across the water to the south is a Falmer campsite inhabited by three leveled Falmer. The camp has a Falmer chest, three corundum ore veins, and in the tent at the top of the hill, a Dwemer boss chest. 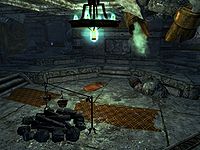 The first chamber inside the Tower of Mzark

Upon using the lift beyond the door on the northern face of the tower, you will arrive in a short corridor leading to a small chamber. After entering the chamber, immediately to your right is a stone chair and three tiers of shelves. There are forty-one ruined books resting on the shelves, as well as two Dwemer gyros and a random heavy armor helmet. There are also two Dwemer chests resting on the shelves, one of which has a novice-level lock. Directly opposite these shelves, in the east corner of the room, is another shelf with a random soul gem.

In the middle of the room, surrounded by more than a dozen stone benches, is an extinguished campfire with two pots hanging over it. One pot contains two samples of charred skeever hide, while the other pot contains one glowing mushroom. Nearby is an unowned bed roll and a knapsack propped up against an unusable barrel.

Moving ahead to the far right (west) corner, you will see three stone chairs in front of two tables littered with twelve more ruined books. Resting on one of the tables is a copy of the Smithing skill book The Armorer's Challenge, as well as one of five random potions (a potion of cure disease, cure poison, healing, magicka, or stamina). To the left of the skill book is a Dwemer shelf holding a thistle branch, a bowl of spriggan sap, two pine thrush eggs, and two Dwemer plates. A Dwemer cog rests on top of the shelf.

On the opposite side, in the south corner of the room, is a symmetrical arrangement of three stone chairs, two tables, and another Dwemer shelf. The shelf contains eleven more ruined books, two Dwemer cogs, and another chest with a novice-level lock. The adjacent table holds an apothecary's satchel, a scroll of Candlelight, a scroll of Muffle, and various items of clutter. A Dwemer dish and a Dwemer plate are between the two tables. Resting on the other table with two more ruined books is a leveled potion of strength. 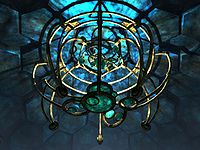 The Oculory's focusing lenses hanging in the main chamber

Continuing through the door to the southwest brings you to a short passage with two Dwemer urns on flanking shelves and a closed door at the end. The door leads you to a large circular main chamber which houses the Oculory, a curious device created by the Dwemer for unknown purposes. Enter the chamber and continue to move in a clockwise direction up the winding ramp, eventually reaching the Oculory. This device has numerous focusing lenses, and is used during the related quests Elder Knowledge and Discerning the Transmundane to acquire an Elder Scroll and extract information using the Blank Lexicon. Controls for the device are on a raised podium, which features several buttons and a receptacle for placing the lexicon. Behind the controls, along the back wall of the main chamber, is a Dwemer shelf with five Dwemer cogs piled up next to it. This is especially helpful to the Dragonborn during the first part of the quest Arniel's Endeavor.

Directly below the podium, you will find the skeletal remains of Drokt, along with his journal beside him. From reading his journal, you can deduce that he became obsessed with the Oculory, but died without successfully focusing it. Reading it may also aid you in solving the Oculory puzzle during the related quests. Drokt carries exactly eighteen gold, three pieces of charcoal, a roll of paper, a sample of bone meal, and a steel dagger.

Proceed through the door below the focusing controls along a short passage to the lift that will take you back to the surface. 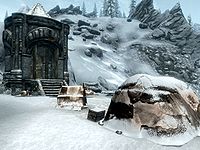 The lift on the surface with the abandoned campsite

Upon reaching the surface, you will find yourself in an enclosed area. Simply activate the lever to the right side of the gate to unlock it; this adds a new marker to your map if you have the Runed Lexicon, allowing you to fast travel to this lift. The lift, together with the three Great Lifts, will now serve as an easy access point to Blackreach.

Outside the lift is an abandoned campsite with two tents. After exiting the lift, immediately to your left is a lit campfire with a pot hanging over it containing two pheasant roasts. To the right of the stairs is a table with small and large Dwemer plate metals, a Dwemer plate, and a potato. A knapsack leans against this side of the stairs next to a shovel. Both tents contain unowned bed rolls, and between the two tents is an unlocked chest. Inside the larger tent lies an empty chest beside a sack and a table strewn with various equipment, including an iron sword, an iron dagger, a pair of iron gauntlets, a pickaxe, and a saw.