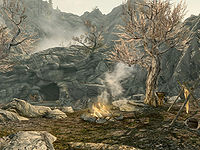 Red Eagle Redoubt is a small cave and two exterior camps, one small and one sprawling, all occupied by Forsworn located east of Markarth. 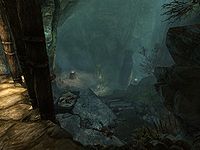 Looking down over the altar area in Red Eagle Ascent

The map location is near the highest point of this small range, just southwest of Sundered Towers, found at the peak. The surrounding area is populated by a large number of Forsworn of increasing skill as the player approaches the peak, which itself is home to several elk.

Two leveled Forsworn guard the approach from the northwest. One of them is next to a campfire, with an iron ore vein and a rack for drying hides nearby. The second Forsworn is on top of a rock with a small wooden table and chair and wooden steps up to it. The entrance to Red Eagle Ascent is to the left of this raised area.

This cave is a typical Forsworn encampment with the normal sharpened stakes and goat head decorations as well as vegetation throughout. Upon entering, there is a tunnel that twists and turns, until you pass a tree stump with a patch of mora tapinella growing from it, after which the tunnel opens up. There is an elk head off to the left with a lit lantern in front of it, with a deer hide nearby. Just after this, on your right is an iron ore vein behind some of the sharpened stakes, next to a tree with a couple taproot ornaments. Across the path by this is a tripwire that drops an oil lantern on an oil slick trap. Setting this off will alert the two Forsworn that are guarding this part of the cave and can be used to your advantage in dealing with them. Behind the previously mentioned tree is a small coin purse on the ground. Near where the two Forsworn are standing is a lit brazier with a random healing potion next to it, while an adept-locked chest is behind some roots on the opposite side of a tunnel entrance heading east.

Through the tunnel there are fly amanita and several white cap fungi before a flight of stone steps up to the next cavern. There is a bear trap just after entering this cavern, hidden among some of the vegetation. Three more Forsworn make this room their home; the first is at the top of another flight of stone stairs, and the other two are at the rear of the room. Before reaching the stairs, you pass another white cap patch on your right, and just before the stairs, a burial urn is on your left.

At the top of the flight of stone stairs is a pressure plate that activates poison darts fired from your right across the path in front of you, and on your left is a handle that can be used by the Forsworn to activate a falling boulders trap below. Off on your left behind a tall pillar is a lit brazier with a random battleaxe and helmet lying beside it. Following the path up over a few wide steps, you reach an area with a blood-covered altar holding a leveled bow, a random potion of magicka, and a decapitated skeever. Also on this plateau are a chair and a flight of wooden stairs with an unlocked chest and random stamina potion underneath.

The stairs lead up to a corridor that branches off to your right to the exit, and ahead to a blocked corridor with a fly amanita, two bleeding crowns, a blisterwort fungi, and a medium coin purse. Taking the branch to the right and up a few more steps, you reach an unlocked iron door that leads out to Red Eagle Redoubt.

Upon exiting, you are at the bottom of several flights of stairs up. There is a campfire with a pile of firewood behind. Each flight of stairs has Forsworn guarding them, each increasing in skill as you go higher. Before climbing, if you travel around to the left of the first flight of stairs, underneath a fallen stone tower you will find a large coin purse.

Ahead are more steps passing under three arches. Growing from the second of these is a hanging moss plant. As you pass under the third, there is a small Forsworn camp on your left with two open tents and two long wooden tables and benches between them. There is a Forsworn sitting at the tables and a second sitting in a chair in the farthest tent. Too much noise taking these out can alert a Forsworn wizard from a tent farther behind on the next plateau up. The first tent contains a single hay pile and a barrel, while the second tent contains the chair the Forsworn was sitting on.

Back on the path, you pass a stone pillar and a lit brazier on a stand on your left. Here the camp splits, with a single tent with the wizard on your left and the main part of the camp to your right. Inside the tent with the wizard are an unowned single bed, an alchemy lab, and a food barrel with a leveled dagger and a copy of the Alteration skill book Reality & Other Falsehoods on top and random boots beside it.

The path continues heading east towards Sundered Towers and the boss of this redoubt along with one other Forsworn and another raised area reached via stone stairs. Before that, traveling south down the side of one of the tents, you'll reach a melee practice area including two dummies and a wooden table holding a random greatsword. On your left before reaching the stairs up to the boss is an archery practice area including two archery targets and a wooden table holding a random bow.

Climbing the stone stairs, you'll encounter the last Forsworn before the boss, and pass a wooden flight of stairs up to Sundered Towers, with a tree stump with a mora tapinella growth on the left of these stairs. Ahead, the Forsworn boss will be sitting on a throne, or if alerted, searching for you near an altar. The boss will have Red Eagle's Fury. Past the throne and altar are a few steps down to another tent containing an unowned single bed, a boss leveled chest, a chair and wooden table holding a mead barrel, a copy of The Legend of Red Eagle, a leveled stamina potion, a random shield, and a lit lantern. This chest will hold any item you have been sent to Red Eagle Redoubt to find.