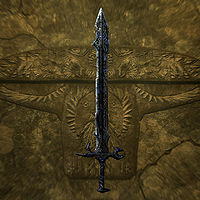 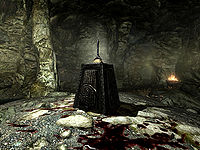 Red Eagle's Bane is an Ancient Nord Sword which serves as a reward for recovering Red Eagle's Fury and slaying the eponymous Red Eagle. Its enchantment does ten points of fire damage and turns undead that are at or lower than level thirteen for thirty seconds. Tempering Red Eagle's Bane requires a steel ingot and the Arcane Blacksmith perk. If the Dwarven Smithing perk is also unlocked, the improvements to the weapon will be doubled.

Red Eagle used the original version of this weapon in an attempted rebellion against the rule of Empress Hestra, as told in The Legend of Red Eagle. Before the Imperial conquest of The Reach, Red Eagle was one of many feuding kings of The Reach, prophesied to unite the region one day. While his throne at the Sundered Hills was eventually lost to him, he gathered all loyal Reachmen in a revolt against Imperial rule, which succeeded in almost forcing them out for two years.

However, the Imperial legions would not be driven off, and Red Eagle's fortress was eventually surrounded and besieged. At the end of the siege, Red Eagle sallied forth against the Imperials alone, naked, and with this sword in hand. The story claims he slew a thousand of them before the force was routed from his stronghold. Victorious, Red Eagle collapsed when night fell, and was placed in his tomb, Rebel's Cairn. Before finally dying, Red Eagle gave his followers his sword, and commanded they continue his campaign to free The Reach. Once The Reach had been totally liberated, the sword should be returned to him, in his tomb, with the intention that this would resurrect him and allow him to lead them once more.

Eventually, the weapon found its way into the hands of the modern group fighting to free The Reach, the Forsworn. At their fortress inside Red Eagle's old one, a Forsworn Briarheart possesses the weapon, with a nearby journal that includes a ritual to resurrect Red Eagle. Taking the weapon and going to his tomb will lead to the discovery of an altar with a slot to place Red Eagle's Fury. Placing it in the slot shall unlock the hidden passage to Red Eagle's true tomb, as well as causing him to rise from the grave. Killing Red Eagle will cause the sword to transform from Red Eagle's Fury to Red Eagle's Bane, and complete this quest.