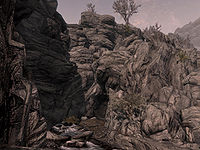 Reachwater Rock is home to the crypt of Archmage Gauldur. It cannot be fully explored unless you are well on your way to finishing the related quest.

It has only one zone: Reachwater Rock.

The path to Reachwater Rock is on your right along the road towards Falkreath heading southeast, just before crossing the last bridge before the turning for Karthspire camp. One silver ore vein is to the right of the path before reaching the stream. The path ends at a stream falling from the mountains above; the cave entrance is through the waterfall. One iron ore vein is on the opposite side of the stream where the path ends. 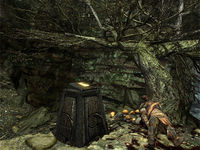 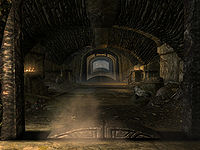 This place was sealed at great price...

Upon entering this natural cavern, you will find a waterfall on your right, with the stream heading north-south into the cavern. If you have the Fishing creation, some Fishing Supplies can be found here. Fish from Underground waters can be caught here.There are many mushroom ingredients growing in this first room and throughout the ruin; see the table below for the totals. The stream drops into a pool of water, with an adept-locked chest and a lootable skeleton with a random shield and a random greatsword at the bottom. The path winds around the pool to the left; on your left is a lit brazier with an orichalcum ore vein next to it. The path continues over a rock bridge to an island in the middle, with a dead adventurer next to a tree. To the left is a plinth holding the emerald dragon claw, which is needed for the door in this chamber across the next bridge. Underneath the claw is an Ancient Edict, which continues the lore for the related quest and warns you to not to continue. Looking east from the puzzle door, you will see above the ore vein on the far side of the cavern a ledge containing an unlocked chest. This can be reached by using Whirlwind Sprint. With only one word, you will need to stand on top of the claw-like piece of broken statue near the tree and move forward or jump after shouting until you scramble onto the ledge. With two or three words, the ledge is more readily accessible.

Climb the second rock bridge up to a puzzle door. Examine the underside of the emerald dragon claw in your inventory menu for the correct combination, Bear—Whale—Snake. Upon opening the door, you will see that it in fact opens a series of four similar doors in a row. Follow the corridor through the now open four doors to a second puzzle door. This door is opened using the ivory dragon claw found in Folgunthur during the quest; the correct combination is Eagle—Eagle—Dragon. This door is protected by a poisoned dart trap, which shoots from either side after incorrect combinations.

The door opens to the top of a flight of stairs, with a bench on your left and a burial urn on your right. At the bottom of the stairs are four lit braziers; behind the back right-hand brazier is a random potion of healing, and behind the back left-hand brazier is a burial urn. To the south is a large urn. The path continues down to the north, opening into a large room with a total of eight upright sarcophagi around the room on different levels. At the northern end of the room is a stone table where you place the three parts of the Gauldur Amulet during the related quest. Behind this is a ninth sarcophagus which contain the remains of Archmage Gauldur; once you have completed the quest, search his remains for a large amount of septims. All of the inhabitants of the upright sarcophagi can be dealt with using a rune spell prior to placing the amulet parts. 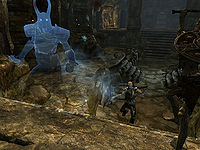 On your way back out of this room after the end of the quest, you will see that next to the large urn to the south, a doorway has opened in the wall. Past the doorway is a boss chest, a random helmet, sword, shield, and battleaxe, a filled soul gem, and a large coin purse.