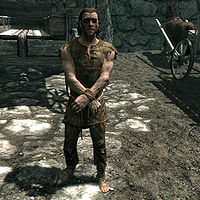 Lokir of Rorikstead is a Nord horse thief. He is bound in the same prison carriage as Ralof, Ulfric and you on the way to Helgen at the start of the game. He stole a horse and was riding it past the border at the time of the Imperial ambush on the Stormcloaks. Apart from the player, Lokir is the only prisoner on the cart who is not a Stormcloak. When his name is called, he will be overwhelmed by the thought that he's going to be executed for his theft and make a run for it, only to be cut down by archers.

He wears a roughspun tunic and a pair of footwraps, and is bound by a pair of prisoner's cuffs. 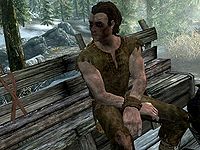 "No, this can't be happening. This isn't happening."

Ralof: "Hey, you. You're finally awake. You were trying to cross the border, right? Walked right into that Imperial ambush, same as us, and that thief over there."
Lokir: "Damn you Stormcloaks. Skyrim was fine until you came along. Empire was nice and lazy. If they hadn't been looking for you, I could've stolen that horse and be halfway to Hammerfell. You there. You and me - we shouldn't be here. It's these Stormcloaks the Empire wants."
Ralof: "We're all brothers and sisters in binds now, thief."
Imperial Soldier: "Shut up back there!"
Lokir: "And what's wrong with him, huh?"
Ralof: "Watch your tongue. You're speaking to Ulfric Stormcloak, the true High King."
Lokir: "Ulfric? The Jarl of Windhelm? You're the leader of the rebellion. But if they've captured you... Oh gods, where are they taking us?"
Ralof: "I don't know where we're going, but Sovngarde awaits."
Lokir: "No, this can't be happening. This isn't happening."
Ralof: "Hey, what village are you from, horse thief?"
Lokir: "Why do you care?"
Ralof: "A Nord's last thoughts should be of home."
Lokir: "Rorikstead. I'm... I'm from Rorikstead." 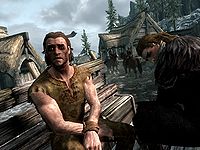 When the carriage pulls up into Helgen:
Imperial Soldier: "General Tullius, sir. The headsman is waiting."
Tullius: "Good. Let's get this over with!"
Lokir: "Shor, Mara, Dibella, Kynareth, Akatosh. Divines, please help me."
Ralof: "Look at him. General Tullius the Military Governor. And it looks like the Thalmor are with him. Damn elves. I bet they had something to do with this."

As the carriage stops in the center of Helgen:
Lokir: "Why are we stopping?"
Ralof: "Why do you think? End of the line. Let's go. Shouldn't keep the gods waiting for us."
Lokir: "No! Wait! We're not rebels!"
Ralof: "Face your death with some courage, thief."
Lokir: "You've got to tell them! We weren't with you! This is a mistake!" 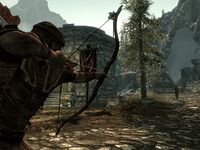 "You're not going to kill me!"

He then tries to run before he can be beheaded:
Imperial Captain: "Halt!"
Lokir: "You're not going to kill me!"
Imperial Captain: "Archers!"
One of the archers raises his bow and shoots him down, killing him instantly. After his death the Imperial Captain will call out "Anyone else feel like running?"