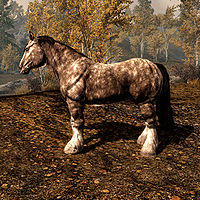 Horses are available as mounts in Skyrim, and improve your movement speed. They are somewhat slower than horses in Cyrodiil but are better at combat and have more endurance. If you fast travel to a city, then an owned horse you are riding will move to the stables outside the city; an unowned horse will return to its starting point. Only an owned horse will stay where you left it when you dismount. Horses you do not own will begin to travel back to their normal locations if you dismount them.

Horses can be purchased from stables, located outside each major city. All horses have the same speed, stamina, and health, varying only in color. The only two exceptions to this are Shadowmere and Frost.

Stealing horses is considered to be a crime. To steal a horse, simply mount it and start riding. Stealing a horse incurs a 50 gold bounty in that hold which stacks every time a guard notices (or is told about) you mounting a stolen horse (even if you dismount and then mount the same stolen horse). However, stealing a horse while hidden in sneak mode allows you to ride the horse without incurring a bounty. It is still considered a stolen horse, so dismounting and then mounting the horse in plain sight will incur a bounty. Note that most horses you encounter are likely to be owned by someone, even if you find the horse in the middle of the wilderness. When dismounted, owned horses will stay in the spot you left them, but stolen horses will run home.

Several horses can be freely borrowed from their owners once you befriend the stable owners. Although you are free to ride these horses, as soon as you dismount the horse will start to return home (occasionally sliding/moving so quickly that it is impossible to catch up with the horse). They may reappear after you fast travel. Locations include:

If the owner of a horse, such as a hunter, dies by a hand other than yours, their horse becomes a free horse and you can use it without it being considered a crime.[verification needed] The horse will still not be owned by you and will not follow you or stay put after dismounting. The same holds true for horses stabled at forts captured during the civil war quests. There is a guaranteed unowned horse at an unmarked hunter camp on the northern coast of Winterhold near Bleakcoast Cave. There is also a random encounter which consists of a dead bandit on the ground and a horse which is free to ride. Also, most of the military camps have two horses at them; some of those horses are free to ride as well, even if you are on the opposite side from the camp (e.g. if you are a member of the Legion, the horses in the Stormcloak camps are still free to ride). Finally, most of the other unowned horses follow a walking route, with a spawning point and a final destination. When you fast travel, all unowned horses are reset to their original spawning positions; this means that if you fast travel to a location where a horse spawns, you can reliably mount that horse if you do so quickly, before the horse leaves on its route.

There are three unique horses available to you:

The Wild Horses Creation adds the ability to tame wild horses. When you encounter one, you will have to chase it down and mount it, prompting the following message:

Wild horses will buck until tamed. Stay mounted until they submit. If you are thrown, try again. Once tamed, you can add a saddle and rename them at any stable.

When changing horses, tamed horses will return to the location where they were found.

You will need to remain mounted on the horse until it is successfully tamed. It has a chance to ragdoll you when bucking, which will force you to chase down the fleeing horse once you get back on your feet. Once tamed, the horse is yours. Most wild horses will return to the original location they were found, but the Unicorn will instead return to the College of Winterhold.

There are eight wild horses in total. All except the Unicorn are named "Wild Horse", but are distinguished here based on their miscellaneous objective name:

Creation Club adds a few other options for non-horse mounts:

The option to rename your horses is added by the Wild Horses Creation. You can rename any horse (not just wild horses) by speaking to a stablemaster and selecting the dialogue option: "I'd like to register and rename my horse." This will give your active mount a random new name from the following list:

Note that the horse's original name is permanently lost, but you can continue to click the dialogue option to randomly cycle through the above list of names.

With the Wild Horses Creation, you can speak to any stablemaster about changing your active mount's saddle by selecting the dialogue option: "I'd like to change my horse's saddle." This will allow you to select from a number of visual options for your horse:

These saddle options are available to wild horses as well as base game horses like Shadowmere.