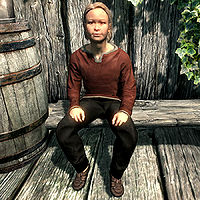 Frodnar on the bench outside of the Sleeping Giant Inn

Frodnar is a Nord child who lives in Riverwood. He enjoys playing pranks on people and can sometimes be found talking to his friend Dorthe about pulling a prank. He is often accompanied by a dog named Stump as well.

Frodnar is the son of Gerdur and Hod, who own the local mill. Like his parents, Frodnar is a supporter of the Stormcloaks, and has a great deal of respect for his uncle Ralof. Should the player choose to accompany Ralof to Riverwood after escaping from Helgen, a scene will occur in which Frodnar eagerly asks about the status of the war and professes his desire to join the Stormcloaks:

Frodnar: "Uncle Ralof! Can I see your axe? How many Imperials have you killed? Do you really know Ulfric Stormcloak?"
Gerdur: "Hush, Frodnar. This is no time for your games."
Frodnar: "Aw, mama, I want to stay and talk with Uncle Ralof!"
Ralof: "Look at you, almost a grown man! Won't be long before you'll be joining the fight yourself."
Gerdur: "Go and watch the south road. Come find us if you see any Imperial soldiers coming."
Frodnar: "That's right! Don't worry, Uncle Ralof, I won't let those soldiers sneak up on you."

Frodnar wears child's clothes and a pair of shoes, and is equipped with an iron dagger. He carries a key to the family's house, a selection of food and toys, and a small amount of gold.

He thinks very highly of himself and will sometimes say these quotes:
"You're new around here, so I'll go easy on ya, but don't get on my bad side."
"Get me mad, and I'll prank ya. And not a little. A lot."
"Ah, everybody around here's so serious."
"So I like to have a little fun, so what."
"My friend Dorthe doesn't like my pranking. "You're being mean, Frodnar!" So what if I am?"
"Mother wants me to work at the mill, but I ain't nobody's slave."
"You gotta have better things to do than talk to me all day..."

Frodnar is usually seen together with Dorthe and Stump, and can be heard having a conversation about a prank involving Stump:

Dorthe: "Wait, so... a costume? You're not serious..."
Frodnar: "Sure I am. We get some furs and tree branches, paint them white, and then tie them to Stump. Instant Frostbite Spider!"
Dorthe: "Frodnar... nobody is going to believe that your dog is a... Frostbite Spider. And if they do... they'll kill him. That's not much of a prank."
Frodnar: "Oh yeah, and what would you rather do?"
Dorthe: "How about... we play tag! You're it!"
Frodnar: "Hey, no fair! Get her, Stump!"

Sometimes Frodnar and his father Hod can be seen spending some quality time together. When they have a conversation, Hod will usually ask his son about the recent pranks he did, and also encourages him. Frodnar will pick between three random lines and Hod will do the same: