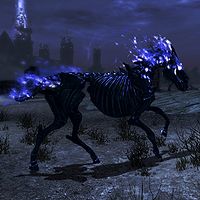 Arvak has several noteworthy advantages over other mounts: he can't be permanently killed, he costs no money, and you don't need to worry about losing him. Despite being a summoned horse, he can be kept indefinitely (until you dismount) as long as you are riding him when his summon time of 60 seconds expires. Additionally, Arvak is the only horse that can be used in Blackreach or on Solstheim.