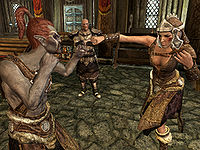 Athis and Njada Stonearm in a fistfight

Unarmed Combat is a sub-form of combat that involves attacking an opponent with your fists, performed by attacking with nothing equipped (spells, weapons or shields) in one or both hands. Unarmed combat does not have its own skill tree and cannot be developed like other skills, but certain races start out with higher unarmed damage, and the ability does have perks and a specific enchantment that may enhance its damage. Unarmed combat may be a reliable type of combat early in the game when opponents are at lower levels, matching your character level.

Base Unarmed Damage and ReachEdit

While all races of Men and Mer do the same amount of unarmed damage (base of 4), Khajiit and Argonians do more unarmed damage. The Khajiit's beginning advantage, granted by their passive claws trait, enables them to deal more damage with fists than with weapons in the early levels of the game. However, these damage values do not improve with the level progression of skills (such as One-Handed) or overall level, meaning eventually unarmed attacks become less effective than attacks with weapons or spells as you continue to improve the relevant skill trees.

†The in-game text states that the Claws passive ability adds 15 points to Khajiits' unarmed damage, but the actual effect magnitude is 12. The game data also describes the effect as "Khajiit claws do four times the damage of a man's punch", which is incorrect, as it is actually 5.5 times the damage.

While the exact speed of unarmed attacks is not known, if it is slower than 1.3 (dagger speed), you can speed it up to dagger speed like with any one-handed weapon, by holding a dagger in your left hand and punching with your right, at the expense of being unable to block.

The Fists of Steel perk adds between 10 (iron) and 18 (Daedric) to the total unarmed damage you deal when you wear heavy armor gauntlets. The value added to the damage is the base armor value of the gauntlets; thus, improving the quality of such gauntlets by smithing does not increase this value, nor does leveling the Heavy Armor skill.

Contrary to popular belief, the Dual Flurry and Dual Savagery perks have no effect whatsoever.

A unique item found within The Ratway, the Gloves of the Pugilist is the only item within the game that contains the Fortify Unarmed Damage enchantment. To maximize unarmed damage, you can disenchant these gloves and then apply the enchantment to both gloves and rings.

Now with Anniversary Edition there are more items that contain the Fortify Unarmed Damage enchantment. The first comes with Fearsome Fists with alternate designs to gauntlets and gloves for unarmed combat, and merchants can sell an enchanted version with Fortify Unarmed Damage. A second creation club that came with Anniversary Edition is The Contest with the unique item Fists of Randagulf, however the enchantment description is wrong. It doesn't increase unarmed damage by 20%, but by 20 points.

Being a werewolf in beast form sets your base unarmed damage to 20 (meaning Khajiit actually lose damage, since they lose their Claws trait, dropping from 22 to 20, and Argonians gain less benefit than other races) and grants the werewolf additional bonuses to unarmed combat damage depending on character level, from 0 at level 10 or less to 60 at level 46 . The Dawnguard add-on added another way to increase the unarmed base damage while being a werewolf by the addition of a specific perk, Bestial Strength. This perk can be chosen multiple times and adds a flat percentage-based damage increase to all damage while in the Werewolf Beast Form, multiplying unarmed damage by 1.25 to 2, depending on number of times taken.

Most of your equipment does not apply in beast form, so you lose Fists of Steel if you had it, but you can wear a Ring of BloodlustDB for another 1.5x multiplier to unarmed damage, at the cost of applying the same multiplier to taken damage.

The net effect of all of these is unarmed damage 80 base at level 50, 160 with all of the damage increasing perks, and 120 or 240, respectively, while wearing the Bloodlust ring.

Note that being in Beast Form also alters the speed of your unarmed attacks (to be faster), but the exact formula is not known.

Being a vampire grants the possibility of increasing unarmed combat by using the power Vampire Lord:

Overall unarmed damage therefore ranges between 10 at low levels with no benefits up to 90 (70 physical and 20 poison) with all possible benefits.

Taking the Necromage perk in the Restoration tree amplifies Fists of Steel mentioned above by 25% as a vampire, but not while in Vampire Lord form.

It's also possible to decrease unarmed combat damage, since you will lose the following unarmed damage sources: 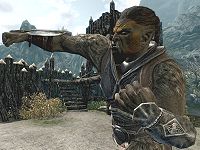 A brawl is a fistfight in which either party attempts to beat the other until their health is depleted (but not killed). Some NPCs will challenge you to a brawl and some quests require you to challenge an NPC to brawl. Rewards for winning a brawl can include a monetary gain from a bet with your opponent, a reward from a quest giver, obtaining information, and increasing NPCs' disposition towards you.

During a brawl, spectators will gather around you and your opponent and shout encouragements or other phrases at you, such as "Fight! Fight!", "Those fools are actually fighting!", "Who taught you to fight? Keep those hands up!", "Drive that snowback to the ground, come on!", "Remember ... hit the one in the middle!", "Are you just going to take that? Fight back!", and "Twelve septims on the big one!"

You must fight someone by attacking only with your fists or bashing with a shield until a winner emerges. When combat begins, your weapons and spells automatically unequip. You may use spells like Healing, or a shield, but any damage dealt to your brawling partner other than that from bashing or punching (including the passive effect from the Ebony Mail and the Creation Club's Lord's Mail) will void the fight and count as a crime. The rules of brawling prohibit you from healing an opponent.