Enchanting description: Reanimate a weak dead body to fight for you for <dur> seconds.

Reanimate revives the corpse of a targeted NPC. The corpse comes back to life and fights for the caster for the duration of the spell. The advantage of reanimated enemies is that there is a variety of enemies to reanimate as opposed to conjured creatures who have to be unlocked or bought individually.

The following items use this effect, but cannot be disenchanted:

The following spells use the Reanimate group of effects. Following each spell is the specific variant of the effect that it uses: 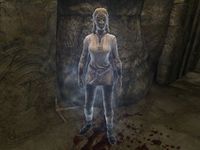 A zombie with the Ahzidal's Necromancy effect

The unique Ahzidal's Necromancy enchantment available from Ahzidal's Ring of NecromancyDB changes the effects of your Reanimate spells when equipped. Reanimated corpses will be covered in frost and will explode for 50 points of Frost Damage the first time they take damage. This kills the zombie in the process, however.