This article is about the NPC added by Dawnguard. For the NPC in Markarth, see Morven. 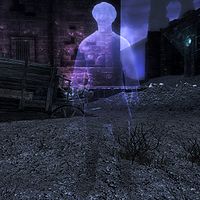 Morven Stroud is a Breton trader from High Rock whose soul was trapped before his death. He unknowingly brought fake ingredients to a coven of necromancers, who killed him, therefore trapping his soul in the Soul Cairn. He can be found to the east of the gap in the large wall which runs through the center of the Soul Cairn, standing in front of a building. The ruins of his cart lie behind him.

When asked about what little he has left, he offers to trade you a piece of leveled gear for 25 soul husks.

For 25 Soul Husks, Morven will trade an item to you. He will give a unique response according to your choice of item:

Morven's items use the same lists as the very highest tier of randomized rewards in dungeons. This means that the items range from iron weapons and the most basic of spells, to daedric weapons and expert-level spells. This also means that you may receive an iron weapon even at level 100.

The armor utilizes a different approach but with essentially the same outcome as the weapons. Both heavy and light have five types of armor available, boots, cuirass, gauntlets, helmet, and shield. The level of enchantment increases typically every two levels up to glass/ebony, and three thereafter. Light armor starts with hide, leather is added at level 7, elven at level 13, scaled at level 20, glass at level 37, and dragonscale at level 47; light armor shields simply skip the leather and scaled stages. Heavy armor starts with iron, steel is added at level 7, dwarven at level 13, steel plate at level 19, Orcish at level 26, ebony at level 33, dragonplate at level 41, and daedric at level 49. Light armor's best enchantments are all available at level 53, but heavy armor only tops out at level 55.