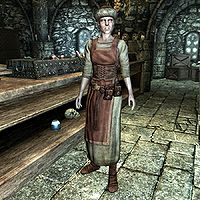 Angeline Morrard, a Breton apothecary, is the proprietor of Angeline's Aromatics in Solitude. Her niece, Vivienne Onis assists her in the store, and takes over ownership of the store if her aunt dies. Angeline used to sell perfumes for use in homes before the war, hence the store's name; she now caters to adventurers and soldiers.

Angeline wears a set of merchant clothes, a pair of boots, and a hat. She carries a key to her store, and a selection of common loot and gold.

If you ask Angeline for Alchemy training, she declines, saying she's just a simple herbalist, and refers you to Lami in Morthal.

Angeline may have some short conversations with her niece Vivienne in her store:

Angeline: "Vivienne, could you check out supplies of mandrake root?"
Vivienne: "Which one is that again?"
Angeline: "It's the root that looks like an ugly little man."
Vivienne: "In that case, I'm pretty sure it tried to buy me a drink last night."