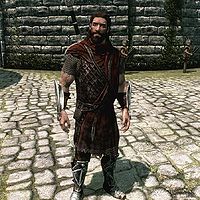 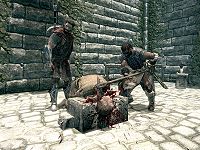 Captain Aldis is the Nord captain in the Imperial Legion and in charge of the Solitude guards. When you first arrive in Solitude he is personally overseeing the execution of Roggvir. He can normally be found pacing the courtyard of Castle Dour. If you side with the Stormcloaks, he will leave the game entirely after the Battle for Solitude.

Aldis employs a rigorous schedule, supervising the training of Imperial soldiers in the Castle Dour courtyard from 8am until 8pm each day, and then returning to the castle to sleep from 8pm to 8am the next morning.

While Aldis is supervising the training of Imperial soldiers, you can ask him if he is with the Legion:

Are you with the Legion?
"That I am. Train the recruits. Turn boys into men. That sort of thing. Thinking of asking the General for some training books. Give the soldiers something to do while they're on rest. Something besides drinking. Ever seen a book called 'The Mirror'? We used to hand it out to boys looking to learn basic shield work."

That's too bad.
"Be glad you're not training under me with that mouth of yours."

If you find the book and return it to Aldis:

I found that book you wanted.
"Good. I'll see if I can get some copies made for the men. Here, something for your trouble. The Legion thanks you."

No News is Good NewsEdit

During the quest No News Is Good News, you are tasked with obtaining information from Aldis about Angeline Morrard's daughter:

Captain, Angela sent me to ask about her daughter.
"Generally posting information is need to know only."

You then have the following options:

In any instance in which you pass, he will respond with:

"Her daughter was sent to Whiterun, the skirmishes there have been violent. The whiterun [sic] legate, he needed to know the Stormcloak positions. He sent out a party to scout the area. They happened upon a large force... I'm told none of them made it back. Private Morrard... Angela's daughter was in that scouting party. She needs to be told."

For the Good of MorthalEdit

During the quest For the Good of Morthal, you are tasked with delivering a letter from Gorm to Aldis:

I have a letter for you.
"For me? From whom?"
It's from Gorm, in Morthal.
"Well now, that is something. Hand it over, please."

He will then read the letter, and continue, saying:

"Oh, no. I hadn't heard from Gorm for a while, so I'd hoped he'd given up on his little scheme. The last time we'd discussed this issue was before this damnable war broke out. Things were different then. Now, what's he's asking, it's just impossible. Even if it worked, the questions and accusations it would cause... Well, I'll take it under advisement. Thank you."

When spoken to directly you can ask him questions:

You were the one presiding over the execution.
"Not my finest hour. Roggvir was a fine and honorable man."

So you think what he did was right?
'No. I think he was entirely wrong. Roggvir's execution was justified and necessary. Being honorable might make you a good man, but it doesn't make you right. Be a better world if it did."

How could you execute a fine and honorable man?
"Sometimes you just do what needs to be done. You don't have to hate a man to kill him. Though, admittedly... it helps."

If you approach him in Stormcloak armor, he will say:

"What do you think you're doing, walking around dressed like a damn Stormcloak traitor?"

Sorry, I didn't mean anything by it.
"Well. I'll let it slide this time. But you'd be smart to take that off. Someone might get the wrong idea."

I'm a proud supporter of Ulfric Stormcloak. What of it?
"Is that right? Here's how the Legion deals with rebel scum like you."

A 40 gold bounty will then be added to Haafingar and Aldis and any nearby Imperial Legion soldiers will attack you.

While he is training guards in the courtyard of Castle Dour, he may give some instructions to his fellow men, such as:

"Concentrate. The battlefield is full of distractions. Ignore them! Focus on your targets."
"Come on, now! I want those arrows dead center! The lives of your fellow soldiers are counting on it."
"Some day soon, you will all see battle. And what you do here, today, may well save your lives!"

If you ask Aldis how the training is going:

How goes the training?
"Their aim could be steadier, but they're battle ready."
Even if that battle is with a dragon?
"Can any man hope to be ready for a dragon? I can but hone their skills and harden their hearts. The rest is up to the gods." or "You're the Dragonborn aren't you? I'm sort of hoping you're going to fight the dragons for us. A normal man is no match for a dragon."

After finishing speaking with him, Aldis can say:

"Keep my men in your prayers. They'll need them if they don't shape up."
"Stay strong. The Eight willing, we'll win this war."

Captain Aldis has some unused dialogue related to a removed portion of the quest "Lights Out!".

Originally, after the Icerunner had ran aground, Aldis would meet up with you on the beach and help you take down the bandits.

"You're the one Mazzaka [sic] described to me."

Who are you?
"I'm Captain Aldis. I'm here to help you take down these bandits."

Just you?
"We're stretched thin in Solitude, and I don't expect these bandits to be much challenge. Are you ready?"

Let's take them out.
"With pleasure."

Aldis apparently would not be present during the fight with Deeja. The fight was also different, as you could either spare or kill her. If you killed her, you would report this to Aldis:

Looks like Deeja won't be bothering us again.
"Good riddance."

But, if she was left alive, then you would request for her to be imprisoned:

Deeja will need to be locked up.
"I'll take care of it."

The lines for both of these outcomes are strangely attached to Jaree-Ra and only recorded in his voice type.

After the Icerunner had been cleared out, Aldis would say:

"I've been away from Solitude for as long as I can. But if you decide to finish these bandits off, you'll be rewarded for your efforts."

You could actually report your succes to Aldis after dealing with Jaree and his crew:

I dealt with the rest of the bandits.
"It's appreciated. The captains around here will have one less thing to worry about. Here's your reward."

You would ultimately receive 200 gold from Aldis for doing this task.

Svari: "They can't hurt uncle Roggvir. Tell them he didn't do it."
Captain Aldis: "Positions."
Addvar: "Svari, you need to go home. Go home and stay there until your mother comes."
Vivienne Onis: "You should tell her that her uncle is scum that betrayed his High King. Best she know now, Addvar."
Addvar: "You're all heart, Vivienne."
Captain Aldis: "Roggvir. You helped Ulfric Stormcloak escape this city after he murdered High King Torygg. By opening that gate for Ulfric you betrayed the people of Solitude."
Beirand: "Traitor!"
Sorex Vinius: "He doesn't deserve to speak!"
Roggvir: "There was no murder! Ulfric challenged Torygg. He beat the High King in fair combat."
Roggvir: "Such as our way! Such as the ancient custom of Skyrim, and all Nords!"
Jala: "Booooo."'
Sorex Vinius: "Booooo."
Taarie: "Booooo."
Roggvir: "On this day... I go to Sovngarde."