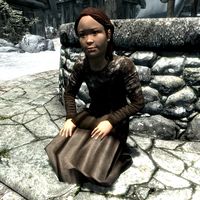 Aeta, a Nord child, is the daughter of Oslaf and Finna. She lives in her family's house in Skaal Village. She is also one of the few villagers, along with Finna, Nikulas, Frea, and Storn, not under Miraak's control after you exit the Temple of Miraak.

She wears a unique set of dark brown child's clothes with an apparent dusting of snow on the shoulders, and a pair of unique Shoes. She carries the key to her house and a selection of food and toys. She is much more like her mother, as she is friendly towards strangers, unlike her father.

When spoken to she can say:

"I want to be a great hunter like Wulf. I practice stalking prey on the rabbits and the foxes in the woods."
"Mother worries when I walk too far from the village. She says a dragon might snatch me up, but I'm not afraid."
"The elders talk of great cities much bigger than our village, but why would anyone need so many buildings?"

If spoken to during the Gardener of Men whilst Storn is being sacrificed:

Once Storn is dead:

Aeta may be seen talking to her father about her first hunt:
Aeta: "Papa, when can I go on my first hunt?"
Oslaf: "I've told you before, little cub, you're not old enough yet."
Aeta: "I just want to see. I promise not to get in the way of the hunters, and I'm not afraid of the beasts in the forest."
Oslaf: "I have given my answer, little cub. I know you are brave and have the heart of a great she-wolf, but all things have a time and place."
Aeta: "Yes, papa."