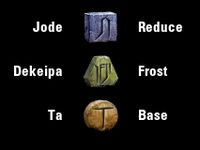 The three types of Runestone: Potency, Essence, and Aspect

Runestones are used to craft Glyphs, which can in turn be used to enchant armor, weapons, or jewelry. Each Glyph must contain one of each type.

You can get runestones from runestone nodes, by extracting them from Glyphs, or by receiving them from your hireling. The potency runes that can be extracted are determined by character level, or Champion Points above level 50, and Potency Improvement skill level. Essence runes and Aspect runes are random, and the highest quality Aspect runes may be found even at low levels.

The Potency of the rune determines the level of items the Glyph may be applied to. At each Potency level, there are two types of rune, "Additive" and "Subtractive". A different Glyph will be made depending on whether an Additive or Subtractive Potency rune is used. Tip: the easiest way to tell the difference between an Additive or Subtractive rune (assuming you haven't translated it yet) is that all Additive runes will have the "ra" syllable in the name while the Subtractive ones will not. (Subtractive ones all have the "de" syllable, but this is not fool-proof, as a few Additive ones do as well.)

Potency Runes are now available (v2.4?) from the Enchanter merchants found near most Enchanting Stations. The costs for Additive & Subtractive runes of the same level are the same cost.

The Essence Rune determines what the Glyph actually does. It may have a different effect depending on whether you use it with an Additive or Subtractive Potency Rune, but the two options will be related. For example, a Dekeipa Rune ("Frost") with an Additive Potency will cause Frost Damage when applied to a weapon, but with Subtractive Potency, it will provide Frost Resistance when applied to jewelry. The amount of damage or resistance is determined by the Aspect Rune as well as the potency of the Potency Rune.

†Unlike other essence runes, Hakeijo cannot be randomly found or be brought by hirelings. It is a rare drop in the Imperial City or can be bought for 5000 Tel Var Stones at the alliance bases in the sewers. It is also available occasionally through events. Psijic portals will also rarely have it.
‡Acquired through the Antiquities system

In addition to creating glyphs, Rakeipa runes are also used to craft many Lighting Furnishing items.

These two bugged runes could originally be received from hireling mail before it was fixed in Patch 1.2.3. However, they still exist in-game and can be traded. The icons pictured here are those used at release. On live, Jaedi now uses the Okoma icon and Lire uses the Oko icon. The effects have been replaced by the Kaderi and Taderi runes, respectively.

The Aspect Rune determines the overall quality of the Glyph. A low-Potency Glyph on a low-level item with a high Aspect Glyph may be more powerful than a higher-Potency Glyph with a low Aspect.

In addition to creating glyphs, Aspect Runes are also used to craft Furnishings in the Enchanting profession. Specifically (there are no Base quality enchanting praxes):

Files mined from the game data hint at possible future additions of 4 more Potency and 1 more Essence rune. The names are a best guess based on the strokes seen in each rune. It is unknown what effect these runes will have, though it's most likely that the Potency runes are intended for a future increase in the level cap. The Essence rune appears to be an alternate version of Hakeijo, splitting it into 4 strokes, "Ha-ke-i-jo" instead of the 3 for "Ha-kei-jo".