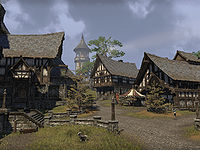 Northpoint is the primary city of House Dorell, located in northeastern Rivenspire. Northsalt Village lies to the west. A chest can spawn on the side of the road outside the city, to the southwest. When you enter the city through the southwestern gate, Jerick's House will be to your immediate right, and Derre's Smithy to the left. Plenty of livestock can be found on this side of town. If you move past Jerick's House and head southeast, you'll end up in Northpoint's graveyard. The stocks and a set of training dummies line the road leading there, past Dorell Manor. Covenant Guards patrol the streets.

Chirane Manor is west of the fountain in the square containing Dorell Manor. Serielle's House is adjacent to Chirane Manor, and lies northwest of it. The street this house is on leads out the northwestern gate. The Sloshing Tankard inn lies north of Dorell Manor's plaza. A chest can spawn in a shed on the northern end of the Sloshing Tankard, outside the building. Several sheep are grazing behind the inn. The Fighters Guild is across the street from the inn. The marketplace and the local Mages Guild lie east of the Fighters Guild. 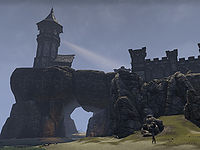 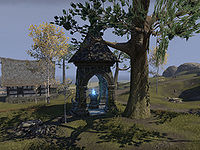 Northpoint Wayshrine is located outside the walls west of the city, south of Northsalt Village. 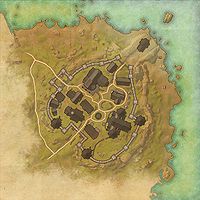 A map of Northpoint