An Orc clan in the pay of the Covenant has converted an old Orc stronghold near Cradlecrush into an arena for blood sports. The amphitheater reeks of blood, Orc sweat, and bog-iron ale.

Cradlecrush is a fort in western Eastmarch, north of Fort Amol. The stronghold can be accessed via the northern gate near the wayshrine. The arena is located in the southeastern corner of the stronghold. The clan's forge is located just west of the amphitheater. A copy of Boethiah and Her Avatars is sitting on a table at the forge. A creek runs north of the forge. The bridge that crosses this creek takes you to a stable with no livestock in it, which sits next to the stronghold's northern wall. You can climb up the watchtowers along the wall.

After you complete the location's objective, the Stormfists are driven out and friendly giants move in. 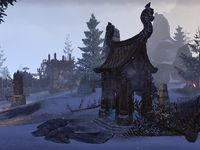 Cradlecrush Wayshrine is located northwest of the fort. If you head southwest of the wayshrine, you'll find the giants' reconnaissance camp. you can find a chest between a short cliff and a boulder south of the bonfire. If you hug the wall and peer into the southern corner (where the fortress wall meets the mountainside), you'll find a thieves trove spawn point.

This Elder Scrolls Online-related article is a stub. You can help by expanding it.
Retrieved from "https://en.uesp.net/w/index.php?title=Online:Cradlecrush&oldid=2389567"
Last edited on 15 April 2021, at 06:04