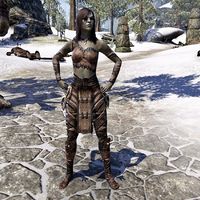 Aspera Giant-Friend is a Dunmer who is helping the giants mount an attack on Cradlecrush. As evident by her dialogue, she is not a mortal and is more than she appears to be.

You'll find her on a snowy hill leading up to Cradlecrush.

"The big ones spotted your approach. Be warned. Cradlecrush isn't the idyllic place it once was."
What happened here?
"You don't know? The big folk prepare to march to war. I sense that you and the big folk share a common foe.
I'd say you arrived just in time. I like that in a champion."
What are you talking about?
"The Stormfists captured the giants' mammoths. They plan to use them against Fort Amol. If you oppose the Stormfists, then you are an ally of the big folk.
Take this horn and blow it at the nearby cave. It will summon a giant to your side."
If you say so.

You can then ask her more questions.

"Stormfist scouts hide in the trees. They ambush us when we least expect it. The giant can help you knock the cowards from their perches. Then kill them and collect any orders they carry.
If you find something, meet me at the camp to the west."
I have some questions.
"I may have answers. Ask away."
How can you speak to giants?
"I don't speak to giants. I know them."
What does that mean?
"I'm a friend of the giants. Let's leave it at that until we get to know each other a little better."
Why are the Stormfists fighting the giants?
"The same reason anyone fights with giants. They're stupid.
Fildgor Orcthane leads the Stormfists to war against his brother, the Skald-King. Along the way, they revel in malice and destruction. That's just one of the consequences of war."

You can speak with her again after you find what you're looking for.

Your conversation continues from the previous quest.

"The notes you discovered suggest two weaknesses in the fort's defenses—the gates and the captive mammoths. Once you get inside, you must free the mammoths to cause havoc and unlock the gates to let us in."
Then what?
"Warlord Lob and his lieutenants have made the arena at the heart of Cradlecrush their headquarters. Use the horn there to sound our attack and strike fear into the invaders' hearts!"
Free the mammoths, open the gates, and blow the horn. I'm on it.

You can ask her more questions if you wish.

"The giant near the natural wall, just behind me to the west, is ready to help you. Just give him a poke and he'll do the rest.
We'll launch our attack once you're inside and we hear the signal."
I want to ask you something before I go.
"My, aren't we an inquisitive one!
I'm not used to so many questions. But I have been spending a lot of time around giants lately, and they're not really big on conversation."
How am I going to get into the fort?
"Leave that to my giant friend. He knows just how to get you inside the fort."
What will freeing the mammoths do?
"One of the documents you recovered indicated that the mammoths are difficult to control.
If you free a few of them, that should distract some of the Stormfist soldiers while we assault the walls."
How do I open the gates?
"The fortress has a north gate and a south gate. One of the notes you took off the scouts says that two locks secure each gate.
Flip the switches atop the towers to unlock the gates. The giants will rush in and we'll split their forces!"
Any other advice before I do this?
"Never bow to authority, especially when they want to cut off your head. Now go find that giant!"

Talk to her after you've opened the gates.

"You did well. Better than I or my master expected. Now, only one task remains."
And what task is that?
"The warlord who leads these brigands, Lob the Cleaver. He's inside, along with the deadly Orcs that are always at his side. They're a nasty piece of work, the lot of them.
Enter the arena and sound the horn. That will tell the giants it's time."
Care to join me?/Will you go in there with me?
"I think not. Such a path fits neither my role nor my disposition. I am a friend, not a foe. Besides, this is your mission. I wouldn't want to steal your glory.
Blow the horn and the big folk will come. They'll help you."
How did you get here so fast?
"It was easy enough to slip inside thanks to all the chaos you caused. I decided to wait for you here."
So Lob won't be alone?/Will Lob be alone?
"Almost certainly not. In addition to the Stormfist legion that Fildgor Orcthane put into his command, Lob travels with a dozen of the fiercest, most savage Orcs you will ever have the pleasure of fighting. They're really quite impressive."
How can I defeat so many foes?
"Don't you know where you are? This is a sacred place to the Orcs. The ritual arena of Malacath. When you blow the horn, you'll signal the giants and challenge Lob at the same time. He'll have no choice but to follow the rules of the arena."
And what are the rules of the arena?
"Lob and his champions must fight you in the prescribed order. They can't attack you all at once. They have to play by the rules and challenge you in waves.
You'll be able to handle that. I have faith in you."
You mentioned a master. Who do you mean?/You mentioned a master.
"You don't get to know everything, mortal.
Does that frustrate you? Just know that some grudges are ancient and some answers are beyond your understanding."
What if I refuse?
"You would abandon this cause that you have worked so hard to advance?
If that's what you wish, go. I won't stop you. But I think you'll be back. We all have a desire to see what happens next."

Aspera will call out to you from outside:

Aspera Giant-Friend: "Watch out! The giants are hurling boulders into the arena!"

After you defeat Lob, meet Aspera outside the arena.

"Welcome back, friend. You survived the challenge and helped the giants take back the stronghold.
I couldn't have asked for a better resolution to this situation. Well done!"
Lob the Cleaver is dead.
"I know. I felt his life force depart when you struck him down. Go in peace, Giant-Friend. You have earned our thanks."

She disappears in a puff of blue smoke after this conversation is over.