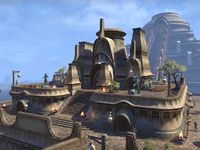 The Temple Canton is located north of Vivec's Palace in Vivec City. Prelate Sabinus is located next to the statue of Vivec and the Shalk. 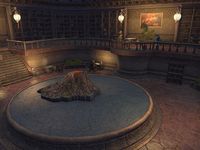 The incomplete model of Vvardenfell

The Library of Vivec is one large two-level room. Bookcases line the walls of the upper level. On the lower level is a large model of Vvardenfell that is filled in as you find ancestral tombs across the island and collect rubbings for Librarian Bradyn.

Shrine of Father of Mysteries

In addition, you can find two shrines for The Pilgrim's Path achievement. 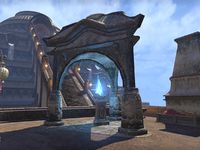 This Elder Scrolls Online-related article is a stub. You can help by expanding it.
Retrieved from "https://en.uesp.net/w/index.php?title=Online:Temple_Canton&oldid=2244686#Archcanon.27s_Office"
Last edited on 23 November 2020, at 19:12