The existence of this monumental subterranean vault surely must be the greatest secret in the Imperial City. The architecture is Ayleid, but the structure was apparently re-purposed in the early days of the First Empire. 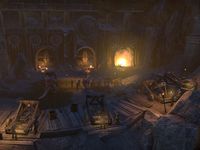 The Dragonfire Cathedral, located in the Ancient Underground, is an ancient temple hidden beneath the Imperial City. It houses the Sublime Brazier, an important relic involved in the Dragonfire rituals. Entrances to the Underground can be found near the three Alliance Bases in the Imperial Sewers (specifically Harena Hypogeum, Irrigation Tunnels and Lambent Passage), and it is only accessible during the related quest.

General Malivus is attempting to break into the Cathedral in order to destroy the Brazier, thus preventing the Dragonfires from ever being relit. 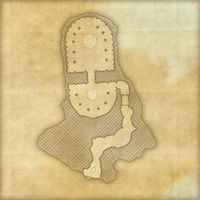 A map of the Dragonfire Cathedral