< Online: Quests: Thieves Guild
Zeira wants to know what really happened to Magnifica Falorah's dowry. She has a plan to uncover the truth of what happened during the guild's failed heist.

Percius Loche is chased by the Iron Wheel. 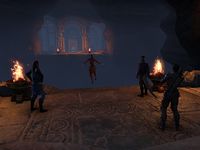 Quen has found a way to cross Shinji's Truth. 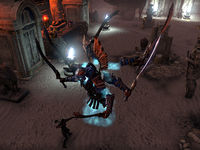 Defeat the guardian to gain access to the treasure vaults. 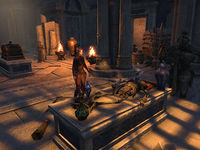 Where is Magnifica Falorah's dowry?

You will find several scrolls in the room, one each about Akishu the blade, Buhliz the serpent, Nishka the symbol of pride, and Puntru the scholar. The excerpt journal from the heist in the center of the room gives you a hint on how to solve the puzzle, mentioning that Tunaska stood on the north, with Akishu (blade) and Buhliz (serpent) surrounding. It also mentions that Narimaya stood on the south, with Nishka (symbol of pride) and Puntru (scholar) surrounding. Go to the pillars at the door. You will find that you can turn all six of the pillars, which have a possibility of three symbols each on them. Start with the left side. From left to right, turn the Center Relief Wheel until you have these symbols: Scroll, Warrior, Straight Stick with lines around it. Move to the right and set the following symbols from left to right: Snake, Warrior, Sword. A door to HoonDing's Passage will then become available to you.

To find Loche's trail, you must walk to the quest marker near the store exit, in the large intersection. When the qeust moves to the next step (Find Loche before the Iron Wheel), head to the southern gate (out to the wayshrine). Instead of exiting, continue south to the large gate. He will be on the right side of the path at coordinates 25.5 x 63.3.

The "secret entrance" is the first dotted line on the right, on your map.