Speak to Burz gro-Khash in Cheydinhal and he will order you to investigate the disappearance of a group of locals at Harlun's Watch. Your contact there is Drarana Thelis. Travel to Harlun's Watch, just south of Cheydinhal and speak with Drarana about the disappearances. She'll tell you about people seeing "strange lights" in the swamps near old Swampy Cave, and failing to return after going to investigate.

Travel southeast to Swampy Cave, which is located at the northern end of the Reed River. Outside the cave are several Will-o-the-Wisps, the likely source of the mysterious "strange lights". However, exploration of the area yields no information on the whereabouts of the missing locals. Proceed to check out Swampy Cave.

Enter Swampy Cave and fight your way through the Swamp Trolls that inhabit it. Eventually you will find the missing locals deep inside Swampy Cave. Unfortunately, there's not much you can do for them since the Trolls have had their way. Upon finding what's left of the missing locals, you should receive a message indicating that you need to clear the cave of all the Trolls. Continue through the cave playing the role of Troll-Slayer. You will need to clear all the trolls from both the first zone of Swampy Cave and from the second zone, Swampy Cave Dry Rock Run. When you have battled all the available Trolls you will get another pop up message telling you to report back to Drarana Thelis.

Return to Harlun's Watch and speak with Drarana about the fate of the missing locals. She will express remorse about their fate, thank you for your assistance and present you with the Mind and Body Ring, a leveled ring with Fortify Strength and Reflect Damage enchantments, as a token of the gratitude of the remaining residents of Harlun's Watch.

Return to Cheydinhal and report to Burz gro-Khash for the standard level-dependent gold reward and one Fame point. This is the last contract from Burz.

If you have already completed The Stone of St. Alessia, Burz will promote you to the rank of Champion. You will next need to go to Modryn Oreyn's house in Chorrol for the quest Information Gathering. Otherwise, Burz will restore you to the rank of Guardian (if you had ever been demoted) and send you to Azzan in Anvil for the Stone of St. Alessia quest. 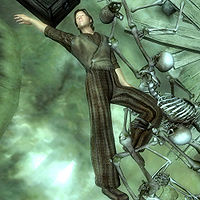 Eduard Denile's corpse, which is required to finish this mission