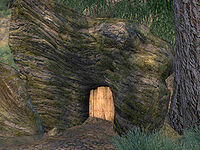 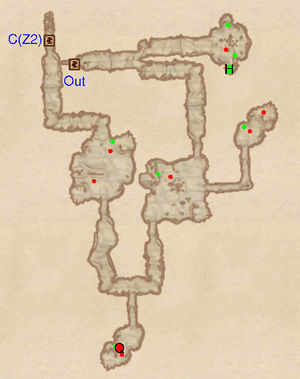 Straight after entering, hug the northern wall and proceed into the room ahead. Inside is a swamp troll guarding two minor loot chests and a non-respawning chest (H) containing one of twelve leveled helmets with a detect life enchantment. Further details in the Notes section above.

You emerge on the upper level of a large room - two trolls are on your level, with another down below. There are also two minor loot chests nearby. Jump down to the lower level and take the tunnel heading north. In the next two rooms are two chests and a troll. Follow the winding tunnels up and make your way towards the exit at Out. There are two rooms on the way, both containing two trolls and two minor loot chests.

Before the related quest, there are two trolls in the first room and one each in the other three rooms.