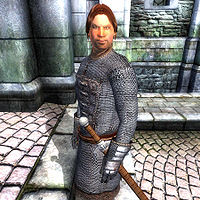 Matthias Draconis is a Breton enforcer and one of the guards employed by Umbacano. He lives together with Collatinus Vedius in his house in the Talos Plaza District in the Imperial City. "Matty", as his mother calls him, has always been a "rough and tumble lad"; this can explain why he is rather rude in conversations. As a member of the Draconis family, he is involved in Next of Kin of the Dark Brotherhood quest line.

He gets up at 5am early in the morning, after which he will head straight to Umbacano Manor in the Talos Plaza District, skipping breakfast. He spends the first hour guarding the front door until he starts his regular patrolling routine, where he will take either a stroll around the mansion with a brief visit to the backyard garden, or will enter the house and patrol the ground floor or the basement; He keeps going until 6pm, when he heads to The Bloated Float Inn for a three hour dinner. At 10pm he will head home to read a copy of Tamrielic Lore for two hours, after which he will go to bed.

He's armed with a fine iron shortsword and wears a chainmail cuirass, chainmail greaves, chainmail boots and chainmail gauntlets. He carries laced leather pants which is the clothing he will wear when he's sleeping, a torch, a small amount of gold and his house key.

Upon seeing you, he may utter a loud snort sound. If you ask him about the Imperial City, he will reflect his opinion on Umbacano: "Master Umbacano is a fine gentleman. Mad for old Ayleid stuff, true, but he's got the dosh, so it's all right, ain't it?" When asked about Umbacano, he will elaborate: "I got no complaints. Kind of an arrogant bastard if you get right down to it, but he pays us well enough." Upon leaving conversation, he will rather rudely say: "Uh-huh. Whatever you say."

When the quest Next of Kin has started, he will greet you with: "Yeah? What're you lookin' at?", after which you get three different options which will end the conversation. If you say "I'm looking at a dead man", he won't be very shocked: "What? A dead man? You got some kind of death wish, is that it?", which causes his disposition to drop by 50. If you say "Time to die, slave of Sithis!", he will get the same disposition drop and he won't be scared of you at all: "Slave of WHAT? Oh, all right, then! You're some kind of crazy, is that it? Come here then! Show me what you've got!" If you say nothing, he will be a bit creeped out by it, but there won't be a disposition drop: "Oh-kaaay... Well then, I'm going to go about my business. And stop staring at me, would ya? You're giving me the creeps!"