If you plan on doing all the intermediate steps to this quest, then before you embark on it, make sure to have at least one lockpick on you that you will be giving away. There will also be many locked doors, a locked chest and a locked jewelry box that you can deal with however you usually deal with locked items, including using spells and/or pickpocketing up to five keys, one for a dungeon, one for the secret room doors, one for the castle interior doors, one for the bedroom door and a final one for the jewelry box at the end.

Go to your new Doyen, S'Krivva in Bravil, to receive this quest. She will tell you that a ring has been stolen by someone not in the guild from a Khajiit named Ahdarji, the widow of a former fence and also a former Thieves Guild member herself. Since the guild frowns on rogue or freelance thieves, they are willing to help Ahdarji; more precisely, they are willing to send you to help her.

Speak to any beggar in Leyawiin and you will be told that Ahdarji lives on the west side of town (she actually lives on the east), goes to the Three Sisters' Inn in the evenings, and eats her midday meals at the Five Claws Lodge. Find her at one of those locations, and speak to her.

Ahdarji tells you that an Argonian named Amusei (remember him?) stole the ring. She wants you to kill him and get her ring back. Of course, you can't kill him since he is essential until The Ultimate Heist is completed, so she says to at least make him suffer. 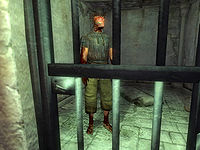 Amusei is in jail

Talk to a beggar to find out where Amusei is. Pay one of them and you learn that he was arrested for trying to swindle Alessia Caro, the Countess of Leyawiin. You also find out that the guards accept bribes to allow people to visit prisoners. Head to the castle dungeon and talk to the jailor. He tells you that "dirty lizards" aren't allowed to have visitors per the countess' orders; however, 20 gold quickly changes his tune. Picking the lock to the dungeon is also possible, though the lock is level-dependent. If you don't even want to do that, pickpocket the guard and steal his dungeon key. Go downstairs, and ask Amusei where the ring is. He questions why he should tell you. Bribe him with a lockpick, and he reveals that the ring didn't originally belong to Ahdarji, but rather to the countess. After stealing it from Ahdarji, he tried to ransom it back to her and was arrested. The ring is now in the hands of the countess.

In order to avoid a possible future bug, you must then return to Ahdarji and tell her that Amusei tried to sell the ring back, she will say that she will make better use of the ring and will pay double for you to steal it back for her.

If you talk to a beggar, he or she will tell you to talk to Hlidara Mothril, the countess' handmaiden, who stays with the countess all day. The beggar will also tell you about other "secrets" in the castle: a torture chamber specifically for Argonians. Oddly enough, you can get the tip about Hlidara Mothril from the Count himself, although he mentions nothing of the torture chamber. You can ask the countess about the ring, too, and she doesn't seem to get suspicious. 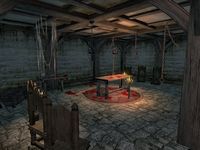 Wait until about 1am and proceed to the countess' private quarters. Head to the Castle Leyawiin Basement to find a lever hidden in an open barrel. Pull the lever and the wall will open up, revealing a passage to the secret torture room. There's a second lever you'll have to pull hidden in the secret passage. Pick the leveled lock on the next door (or steal the key from the count or Caelia Draconis beforehand), sneak left past the patrolling guard, and pick the lock on the leveled private chambers' door. You can also try reaching the Private Quarters via the County Hall itself, but you will have to avoid more denizens and guards that way.

Once inside the countess' room, pick the leveled lock on the jewelry box or pickpocket the key from the countess, grab the ring and some minor treasure, including the letter called Divining the Elder Scolls (which is worth 50 gold), and go out the way you came in. Beware, the guard is still patrolling.

Return to Ahdarji, and give her the ring for a 200 gold reward for your efforts (if you don't tell her Amusei tried to sell the ring, she only gives you 100 gold). Finally, return to S'Krivva for another 200 gold reward, rank advancement to Prowler, and your next mission.

Killing any of the following NPCs while this quest is active will require you to pay a blood price to S'Krivva:

* These NPCs have nothing (at least almost nothing in Caelia Draconis' case) to do with the quest and are actually a target for assassination in another quest for another faction.

This can happen under a number of circumstances: