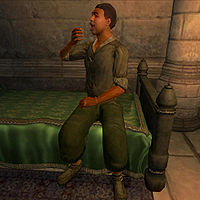 Kellen is a Redguard commoner added by the Knights of the Nine official plug-in. He can be found at the Chapel of Stendarr in Chorrol, where he is involved in the quest Stendarr's Mercy. He is a descendant of Sir Casimir. Although his ancestor was from Cyrodiil, Kellen seems to have come from Hammerfell to seek the care of those working at the chapel in Chorrol.

After the completion of his related quest, Kellen begins a rotation of travel between all cities except the Imperial City. He starts his travel to the next city every Morndas, Middas and Fredas and he will stay at the local inn.

He will travel to the following cities, in this order:

Prophet
"The church is still in turmoil from the attack on the Chapel of Dibella. I don't think anyone has had time to really study this prophet's teachings. My best advice would be to go, listen carefully, and decide for yourself."

Gauntlets of the Crusader
"You've seen them, I assume. The only evidence of what happened so many years ago. Do you know that I thought perhaps I could lift them? That somehow this curse would be lifted if I could pick them up? I tried for hours. Until my whole body ached, and I could barely move. I lay there on the floor next to them, weeping. I'm not ashamed to admit that. I've been at the end of my rope for far too long to be ashamed of anything."

Gauntlets of the Crusader

"I don't know why they're still here. They're so heavy, and I'm so weak. What does Stendarr want from me?"

After you spoke with Areldur:

"What is it? Is there a cure? Has Areldur found a cure? I know there's something he's not telling me!"

Curse
"Ah, so you've heard it, have you? Terrible curse, been in the family almost longer than anyone can remember. When I was younger, I could live with it. Wasn't so bad. But it's only gotten worse over time. I'd come here, to the place it all happened, in the hopes that something could be done. I fear I haven't much time left, otherwise. Areldur has let me stay, mostly out of pity I think, but there's something else. I swear he knows more than he tells."

"I've seen plenty of pity in peoples' eyes over the years. I grew up recognizing it. But with Areldur... There's something else there. And when he speaks to me, there are times I'd swear he sounds... Apologetic. Guilty, even. Why would that be? What reason does he have to hold back information? I know I'm a doomed man, one way or the other. Speak to him, if you can. Convince him to tell me what he knows, as a dying man's last wish."

After you spoke with Areldur:

"You've spoken to him, haven't you. And... And he's told you something you don't want to tell me. I need someone to please tell me what's going on. Please, help me. Have mercy on me."

Curse
"So, what can be done for me? I know you've learned something. I can see it in your face."

There is a way to lift the curse.
"So someone could only lift the curse from me by taking it on themselves? No wonder Areldur didn't tell me. I'm not sure whether to call him a coward, or simply say that I don't blame him. That'd be a large burden to bear. Thank you for being honest with me."

"I'm not sure how I feel. To know that the curse can be lifted gives me hope, but to know that it also means damning another... Would someone taking that responsibility be merciful, or suicidal?"

[Lie] There's no way to save you.
"Really. I see. Then I've no choice but to live out the rest of my days here, I suppose. After all this time, I can't help but hope just a little bit. Hope that somehow there might be a way to save myself."

"Even if I am doomed, I still hold out hope that Stendarr will have mercy on me."

After you obtained the Blessing:

"Come to see the doomed man, have you?"

After you cured Kellen: