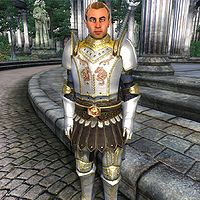 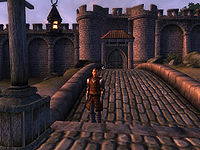 Hieronymus Lex is an overzealous Watch Captain of the Imperial City. He bases his command out of the South Watch Tower, and his room is upstairs there in the Captain's Quarters. He has posted wanted posters about the Gray Fox and is the main nemesis of the Thieves Guild. If you join the Thieves Guild, and go through their quests, he will eventually be re-assigned as Guard Captain of Anvil.

Before his reassignment, Lex has a very rigorous patrol regimen. He wakes up every morning at 6am and eats for two hours downstairs from his quarters in the South Watch Tower. At 8am he begins his patrol in the Arboretum near the gate to Green Emperor Way. At 9am he moves to the main gate of the arboretum to the city isle, and at 10am he heads out to the Arcane University, standing just inside the front gate. At 11am he heads to the Temple District and stands around near the gate to the Arboretum. At noon he returns to the South Watch Tower to eat lunch for two hours, and at 2pm he heads off for his afternoon patrol. He starts at the Temple District's gate to the Green Emperor Way, and at 3pm moves to the main gate to the city isle. At 4pm he moves to stand guard in the Waterfront District behind the lighthouse. At 5pm he heads over to stand near the Marie Elena and converses with its crew until 6pm, when he goes to the Bloated Float for dinner. At 8pm he goes back to the Marie Elena to stand and chat until 10pm, at which point he returns to the South Watch Tower. He stands around on the ground floor until midnight, when he heads to bed in his quarters upstairs.

There are a few exceptions to this behavior due to certain quests. During The Elven Maiden, once the player has found the bust of Llathasa Indarys he will teleport to a spot in front of Armand Christophe's house in the Waterfront, where he will spend all of his time day and night until you try to convince him Myvryna Arano is the thief. At this point, he will escort you to her house for proof. When he has found the bust in Arano's home, he will escort her to prison in the Bastion of the Prison District. Additionally, during the quest Misdirection, once Lex locks down the whole Waterfront, he will teleport to the same spot outside Armand Christophe's house and spend all of his time wandering around there.

Once Lex has been reassigned to Anvil, he acquires an entirely new schedule. First of all, when he finds out he has been reassigned, he travels all the way to the Anvil Castle Barracks on foot. His new schedule begins with waking up every morning at 7am and eating for one hour in the Castle Barracks. He then goes on a lengthy patrol of Anvil Castle. He begins with the Dungeon at 8am, and moves on to the smithy of the castle at 10am. He patrols outside the front gate to the castle at noon. At 2pm, he heads to the private quarters, and then patrols through the courtyard at 4pm. At 6pm he wanders in the dining hall, sitting down to eat at 8pm. At 10pm, he patrols the chambers of Countess Millona Umbranox, before heading back to the barracks and to bed at midnight. While the Gray Fox is interacting with the countess near the end of The Ultimate Heist, he may enter to patrol the great hall of the castle at 10am rather than his usual patrol in the smithy, but this is probably a bug (see below).

Hieronymus Lex wears Imperial Watch boots, cuirass, gauntlets, and greaves. While off duty he will wear a more comfortable middle class outfit consisting of light brown linens, a brown shirt and a pair of pigskin shoes. He also carries a copy of the Imperial Watch key, South Watch Tower key and a small amount of gold. He wields a silver claymore in combat.

When Hieronymus is reassigned to Anvil at the end of the quest Taking Care of Lex, he ceases to be member of the "Imperial Watch" and "IC Citizens" factions. He instead becomes a member of the "Anvil Citizens", "Anvil guard", and "Anvil castle residents" factions. His Imperial Watch armor is removed and replaced with an Anvil cuirass and shield, along with chainmail boots, gauntlets, and greaves. His two keys are removed and replaced with a Castle Anvil key and a Castle Anvil interior key. Finally, he loses his essential flag and can therefore be killed.

When asked about the Imperial City, Lex will say: "Never compromise. Never blink. Never wink at injustice. Never quit trying to make this a better city for everyone." During the quest Imperial Corruption, when asked about the corrupt imperial watchman, he will respond with: "I don't have time for this now. The Gray Fox is on the loose. Take this problem to Itius Hayn. He's also a Captain of the Imperial Watch." If you talk to him again after this, he will greet you with: "Are you still trying to file a complaint against Audens Avidius? I thought I told you to take it up with Itius Hayn."

During the quest The Elven Maiden, before you have the bust, Lex will greet the player with: "Unless you have word of the Gray Fox, my time is limited." Once you have stolen the bust, he will get agitated and upon greeting the player will say: "What do you want? Can't you see I'm in the middle of an investigation?" If you talk to him about the bust of Llathasa Indarys, he will respond: "You know where the bust is hidden?" If you chicken out and respond that you were joking then he will say to you: "Then you are wasting my time." If you accuse Myvryna of having the bust, he may respond in two ways depending on your disposition. With disposition less than 70 he won't believe you: "Your credibility is suspect. You'll have to do better than that to persuade me." However with disposition above 70 he will be convinced: "Are you sure? That can't be right. She's my... I mean she doesn't seem to be the type." When you tell him it is in her cupboard, he will respond with caution: "I don't believe you, but I'll have to check it out anyway. If you are right, there will be hell to pay. You will have to come along." While he is escorting you to Myvryna's house, if you speak to him he will say: "Not now. First we have to see about Myvryna." Once you arrive at Myvryna's house, if the bust is not there he will say: "There is nothing here. Stop wasting my time." However if the bust has been placed properly he will say: "You were right. The bust is here and Myvryna is guilty." He will then confront Myvryna about it: "This citizen is accusing you of stealing the bust of Llathasa from Cheydinhal. I even found the bust in your cabinet. What do you have to say?" When Myvryna tells Lex that he has falsely exposed her as the informant and that the player in fact stole the bust, he will say: "Regrettably I've no further use for you. If what I heard is true, you're the thief. If what you say is true, the Gray Fox knows you are my informant. Either way, it's over. You didn't really think I'd trust the likes of you for very long?" When she complains about his dispassionate response and says he can't do this, he simply says: "Yes I can. You are under arrest for the theft of the bust of Llathasa Indarys, Countess of Cheydinhal. Come with me."

During the quest Misdirection, while the Waterfront is being locked down, if you talk to Lex he will say: "You look like one of the low lifes that infest this place." If you ask him about the Gray Fox, he will tell you: "I'm offering a reward for information leading to the arrest of the Gray Fox. Until he is turned over to me, the Waterfront is closed for 'business.'" When the Dremora has delivered his message to Lex he will respond: "So, the mages send a foul daedra to deliver a simple note when an honest footman would have done. How typical." Upon reading the note he will announce to his men: "All right men. We've been ordered back to our posts. I smell the dirty hand of the Gray Fox behind this."

When you are to deliver the letter from Countess Millona Umbranox informing Lex of his reassignment during quest Taking Care of Lex, he will greet the player with: "You look familiar. Do I know you?" When you tell Lex he is being reassigned, he will be shocked: "I've been reassigned! This is outrageous! The Gray Fox had a hand in this, I know it. I am bound by duty and honor to obey this order. After all these years, he has finally won. Maybe fate will be kind and deliver him to me in Anvil." As the conversation ends he bids farewell with: "I'll leave at once for Anvil."

After he's reassigned to Anvil, he will be replaced by Servatius Quintilius, who, unlike his predecessor, does not believe in the Gray Fox or the Thieves' Guild, and thus, will not cause any trouble for them. The citizens of the Imperial City will be glad that he's gone: "He got reassigned, to Anvil I think. Without him around, all this hustle and bustle about the Gray Fox will go away. I never believed in the Gray Fox anyway. I think the Imperium just made him up as an excuse to raise our taxes." The Anvil guards, however, are quite honored to have him: "He's our new Captain. I've never met a finer man."