Your next job consists of stealing a statuette made in memory of the recently deceased Lady Llathasa Indarys of Cheydinhal. It is only possible to start this quest after you have fenced 100 gold.

Once you arrive in Cheydinhal, asking the beggars reveals that the statuette is located beside Lady Llathasa's crypt in the chapel undercroft of the city temple. The place used to be free to public access, but has recently been placed under guard by command of the town's count, Count Indarys. 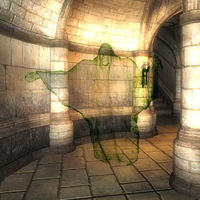 The undercroft is guarded 24 hours a day by the Chapel Guard, an Altmer watchwoman who circles through the undercroft on her patrol route. If she spots you, she will attack you on sight even if you have committed no crime other than trespassing. Killing her will count as a murder, as well as invoking the blood price for the quest (usually 1000 gold). Therefore, the challenge in obtaining the statuette is sneaking past the guard. A decent sneak skill, perhaps coupled with an Invisibility or Chameleon enchantment, and good timing are key to success.

Lady Llathasa's crypt is to the left, down the stairs. In the back of the alcove you will find the statuette (Llathasa's Bust) and a coffin (Llathasa's Tomb). As long as you only pick up the statuette you can sneak back out of the undercroft without incident, and return to the Imperial City.

If, however, you also try to plunder Llathasa's Tomb (i.e., if you activate the coffin to see what's inside), you will conjure up her ghost. The ghost will attack you, which will usually alert the guard as well. The easiest way to avoid this is to simply not look inside the coffin; the one or two pieces of unenchanted jewelry in the coffin aren't really worth the trouble.

Some alternative options for obtaining the statuette are:

Unfortunately, upon arrival in the Waterfront, you find out that Armand has been accused of stealing the statuette and has gone into hiding. Even worse, the Waterfront is crawling with guards including Hieronymus Lex. Talk to Isleif or Hillod in the Waterfront district and ask where Armand is. They will tell you that Methredhel is looking for you. If you don't run into her in the streets or while you're inside a building, visit Methredhel's house to find out more about Armand. Methredhel explains that your job was a setup in order to expose a traitor in the Thieves' Guild. The traitor is a Dunmer named Myvryna Arano (the same woman who delivers the invitation to the Thieves' Guild). In order to turn the tables on her, you must sneak into her house (located on the Waterfront). If your sneak skill is good enough, you may be able to get into the house with guards around (just make sure the sneak "eye" shows that you are undetected); if your sneak skill isn't good enough, you will have to wait a long time before there are no guards around.

Once inside, place the statuette in "Myvryna's Cupboard", which is the cupboard nearest the door and next to her bed. Then speak with Hieronymus Lex, who at this point should be running around the huts on the Imperial Waterfront, and convince him to search Myvryna's house. Lex's disposition must be at least 71 for him to believe you.

Once this is done, Armand will be cleared of charges and will meet you at midnight in the Garden of Dareloth. He will then promote you to the rank of Bandit, as well as giving you the name of another fence, Dar Jee, in Leyawiin, far to the south. This is the last quest you will receive from Armand Christophe. If you ask him for more special Thieves Guild quests, he will tell you to see S'Krivva in Bravil.

Killing any of the following NPCs while this quest is active will require you to pay a blood price to Armand: