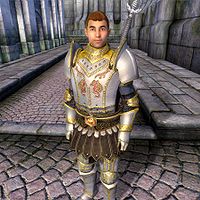 Itius Hayn in the Imperial City

Itius Hayn is a Guard Captain of the Imperial Watch in the Imperial City. During Imperial Corruption, when all the other Watch leaders shy away from the criminal activities performed by a corrupt Captain, Itius will show his righteousness and be the one who arrests one of his own colleagues and saves the Market District merchants from his evil ways.

During the day he wears a mostly complete set of Imperial Watch armor, only missing the shield and helmet. He wields a silver claymore for combat. At night his sleeping attire is a blue & green outfit and a pair of russet felt shoes. He carries a small amount of gold, a pair of burgundy linens, a copy of the Imperial Watch key and a key to the North-Eastern Watch Tower.

Itius lives the life of a typical guard, and he is in charge of patrolling the Elven Gardens District in the morning and the Talos Plaza District in the afternoon. He lives in the Northwest Watch Tower between the two Districts, in the Captain's Quarters on the top floor, and he sleeps there every night between 10pm and 6am. After waking up he starts the day with a two-hour breakfast in his quarters, then heads outside and begins his morning routine; at 8am he will patrol near the gate leading to the Talos Plaza District; at 9am he will proceed to the dead-end northern alleyway of the Elven Gardens; at 10am he will patrol near the eastern gate and at 11am, he checks out the southern gate leading to the Green Emperor Way. At noon he finally takes a lunch break at The Foaming Flask. At 2pm he continues his patrolling, this time in the Talos Plaza District; he starts near the northern gate, then continues to the eastern gate at 3pm. At 4pm he monitors the gate leading to the Temple District and finishes his routine at 5pm with the western gate leading to the City Isle. At 6pm he returns to his quarters and enjoys a two-hour dinner before heading downstairs to the ground floor where he hangs out with the other guards until his bedtime.

The only exception to his daily routine occurs during the Imperial Corruption quest, the morning after Ruslan and Luronk gro-Glurzog has agreed to testify against Audens Avidius. Between 9am and 10am the very next morning, your map marker towards Itius will disappear, and sometimes without ever receiving an actual testimony from the victims, a determined Itius will actively seek out Audens, confront him with his crimes and arrest him. He will then escort the former captain all the way to the Imperial Prison and make sure he is locked up before resuming his duties.

Before you hear about the corrupt guard captain, Itius will, when asked about the Imperial City, provide some friendly and slightly ironic advice: "A short stay in our lovely Imperial Prison should cool your enthusiasm for a life of crime. The drunk tank in particular has a unique aroma." Later on, during your search for an honest captain willing to risk his career for justice, both Hieronymus Lex and, if you have arranged Lex' reassignment to Anvil, his replacement, Servatius Quintilius, will point you towards Itius. As always, Lex will be preoccupied with the Gray Fox and will say: "I don't have time for this now. The Gray Fox is on the loose. Take this problem to Itius Hayn. He's also a Captain of the Imperial Watch." while his successor Quintilius will be too much of a coward: "I've only recently been promoted. I'm not going to cause trouble by filing charges against one of the other Watch Captains. You could try taking your problem to Itius Hayn. Maybe he'll be willing to risk his career by arresting Audens." When you approach Itius about the corruption, he will, if his disposition is below 70, say: "Why should I trust your word? You'll have to do better than this to persuade me to take action against one of the other Watch Captains." After his disposition has been raised accordingly, he will prove much more helpful: "These are very serious charges. If you can get two witnesses to testify against Audens Avidius, I'll arrest him. Otherwise I can't help you." He will bid you farewell with the words: "I hope your witnesses are willing to come forward." If you approach him again about the corrupt imperial watchman after the witnesses have testified but before he has arrested Avidius, he will say, "I have two witnesses willing to testify against Audens Avidius. I'll get a warrant and arrest him."

The morning after you have convinced Luronk and Ruslan to testify, Itius will actively seek out Audens Avidius and confront him with his crimes: "Audens Avidius, you are under arrest for extortion and petty theft. Surrender peacefully and keep what little dignity you have left." Audens then responds, "I'm surprised Itius. I didn't think even you would stoop to arresting a fellow Captain." To which Itius replies, "Only those who break the law."