He'll tell you how Vitellus Donton - Vilena Donton's son - was one of fifteen men who died when the Fighters Guild tried to retrieve the sword Sinweaver from Azani Blackheart in order to complete a contract for a mage named Argoth. The Blackwood Company then claimed that they completed the mission instead, simultaneously establishing their reputation as an alternative to the Fighters Guild and making the Fighters Guild look like incompetent cowards. However, Argoth was mysteriously killed shortly afterwards and Sinweaver went missing, leading Modryn to doubt the Blackwood Company's story. He suspects that - despite their claims - the Blackwood Company never killed Azani, but instead made a deal with him: they paid him part of the contract money to get the sword, and then told him where he could find Argoth to take his revenge and retrieve the sword. Modryn wants to investigate the situation, including possibly killing Azani Blackheart to prove that the Blackwood Company lied.

If you accept Modryn's dangerous mission, he asks you to meet him at the Fighters Guild in Leyawiin and travel to Arpenia to find out what's going on. He'll mark Arpenia on your map. 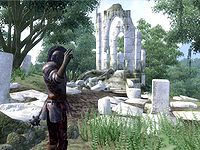 Once you arrive in Leyawiin, speak with Modryn and he'll accompany you to Arpenia, northeast of Leyawiin in the Blackwood region. Explore a bit then talk to Modryn, who will declare that Azani Blackheart isn't there - in fact, the place is deserted. The quest advance is actually triggered by standing within 200 feet of an invisible map marker (in the northeast room, shown at M on the Arpenia map). If you are having problems advancing the quest, stand at that point for a minute, then try talking to Modryn again.

Modryn believes that Azani moved his base of operations to Atatar - a nearby Ayleid ruin. He suggests to search there and will lead the way himself. You can continue to explore Arpenia if you like, as Modryn will wait patiently for you, but apart from a few rats and Ayleid chests the place is empty. Follow Modryn to Atatar but do not fast travel or go ahead of him, because this may cause a bug. The location won't be marked on your map until you arrive and Modryn refuses to move unless you are close to him. Therefore, you must follow him.

Once you're both inside, you may take the lead again. Explore the area, dispatching any bandits along the way and collecting three Varla stones, until you find Azani. Beware, he is a skilled nightblade and is very powerful, so make sure to be fully prepared for the battle (don't count on Modryn for much help). Azani will be wearing Elven armor even if you are of a low level. He also carries Sinweaver, a unique sword with Drain Fatigue and Fire Damage enchantments. Be sure to also take his ring, as it is required to complete the quest.

Speak with Modryn if you managed to keep him with you or return to the Chorrol Fighters Guild to speak with him. He'll need Blackheart's ring (which you found on his corpse) as proof that the killing was done by the Fighters Guild. In exchange you will gain one Fame point and once you speak with Modryn again, he will promote you to Warder.

Following this quest you can either go to Burz gro-Khash in Cheydinhal to start The Fugitives or to Azzan in Anvil to start The Wandering Scholar. The order in which you do these following quests does not matter.