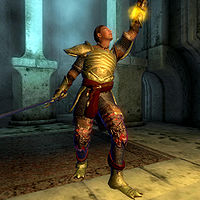 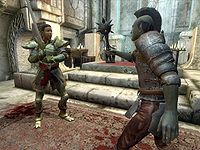 Azani Blackheart is a Redguard nightblade living in Atatar. He appears to be an avid scholar of the Ayleids as he possesses an impressive collection of rare books on the subject. At a full twenty-five levels above the player, he is probably one of the most fearsome warriors in Cyrodiil. Fifteen Fighters Guild members were killed attempting to take his sword, Sinweaver from him. Modryn Oreyn suspects the Blackwood Company was involved.

Azani Blackheart wears a nearly complete set of elven armor, specifically boots, greaves, gauntlets, and a cuirass. He wields the Sinweaver, an enchanted elven claymore. Azani also has his signature ring, which is needed to complete the related quest. Besides these items, he also carries green velvet shoes, a green brocade doublet, a green silk garment, and a small amount of gold.

He possesses an impressive selection of spells for a non-mage NPC: he can cast several minor Destruction and Restoration spells as well as the standard nightblade spells.

You will hear the name Azani Blackheart for the first time when Modryn Oreyn decides to investigate the shady business methods of the Blackwood Company. He will tell you about the failed mission in Arpenia that ultimately cost Vilena Donton's son Vitellus his life: "That mission was the start of it. That was when Vitellus was killed. We were contracted by a wizard, Argoth, to recover an artifact from Blackheart. I went in there with twenty men. I left with five. Vitellus wasn't one of them. He died covering our retreat." The Blackwood Company then succeeded in taking down Azani Blackheart, but Modryn doubts it: "Apparently, they completed that contract for us. I went in there with twenty good men. I can't believe that bunch finished the job. There's more. Argoth -- he's dead, the artifact gone. Sounds like a set-up. Maybe they made a deal with Blackheart. I don't know. But I'll find out."

The plot thickens after a visit to Arpenia; Azani is nowhere to be found and Modryn will say: "Nothing! I knew it! Azani Blackheart isn't here, alive or dead. The bastards! There was no battle. Azani must have made a deal with the Blackwood Company. My guess is that they paid him off. They get the weapon for Argoth, collect the payment, and tell Azani where the mage is. Easy for Blackheart to retrieve the weapon and collect on it." However, Modryn has a plan: "We find Blackheart and get that weapon. We'll finish this contract and let all of Cyrodiil know what happened here. Blackheart has a fascination with these Ayleid ruins. There's one northeast of here, Atatar. My bet is that he moved his base there." In Atatar you will find Azani Blackheart wandering around in Atatar Loria, always on guard and without eating or sleeping. He is hostile and will attack you and Modryn Oreyn with the words: "Fools! Now you die!" After the tough battle, Modryn will round things up: "Azani Blackheart is dead, and our brothers avenged."