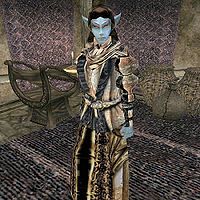 Nevena Ules is a Dark Elf noble and one of House Hlaalu's Councilors. She resides in her manor west of Suran. You will need her vote to become Hlaalu Hortator, but she is an open supporter of Orvas Dren, and will not vote without his approval or removal. She is also interested in the location of Vassir-Didanat Ebony Mine, but is distrusted on this issue by her fellow Councilors, Dram Bero and Velanda Omani (and, evidently, even by Crassius Curio, who will point you to the other two Councilors, but not to Ules: all with good reason, as Ules will pay you absolutely nothing if you reveal the location to her).

Nevena wears an upper-class outfit befitting of her status, which consists of an exquisite shirt with matching skirt, shoes, amulet, and two rings. She carries a glass dagger, a grand soul gem, and 374 drakes. Aside from her natural resistance to fire and the sanctuary provided by her ancestors, she knows the following spells: Resist Fire, Seryn's Gift, Cure Poison, Balyna's Antidote, and Free Action.

Nevena Ules's vote is required for you to become the Hlaalu Hortator. Unfortunately, she won't give you her vote straight away (unless you have already paid a certain mer a visit, that is...):

There are two ways to solve this little problem. Firstly, you can persuade Orvas Dren to support you, either in this quest or in the House Hlaalu quest Dealing with Orvas Dren, which causes her to promptly recognize you as the Hlaalu Hortator:

Secondly, you can kill Orvas Dren, in which case an evidently frightened Nevena Ules will agree to lend you her support:

If you mention the topic again after she agrees to name you Hlaalu Hortator, she says:

And when you have gathered the votes of the remaining councilors, she says:

Finally, after you have received the Belt of the Hortator from Crassius Curio, her greeting changes to:

Note that, like the other councilors of House Hlaalu, she will never agree to name you Hortator if you first kill Crassius Curio, Dram Bero or Velanda Omani:

One way (though not at all a lucrative way) of finishing this quest is by telling Nevena Ules about the location of the Vassir-Didanat ebony mine:

Mentioning the mine again after you reveal its location to her elicits the following response:

And finally, if you were wise (or lucky) enough to share the mine's location with either of the other two candidates, she says: