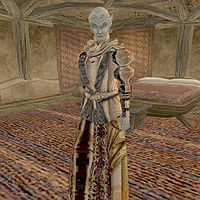 Velanda Omani is a Dark Elf noble and Councilman for House Hlaalu, who can be found at her manor in the Ascadian Isles. You will need her support in order to become the Hlaalu Hortator, but you won't get it unless you deal with Orvas Dren first, as she tends to follow his lead most of the time. She clearly has no qualms about engaging in criminal activities, as evidenced by her role in attempting to steal Indrele Rathryon's land by means of a forged land deed.

She wears an exquisite shirt with a matching skirt, shoes, two rings, and amulet. Furthermore, she wields a glass dagger and she carries a key to her manor, a random gem, and up to 400 drakes. In addition to her natural resistance to fire and the sanctuary provided by her ancestors, she knows the following spells: Enrichment, Great Heal Companion, Rest of St. Merris, Vigor and Resist Fire.

Even though this is not a required part of the quest (and, in fact, choosing to interact with Velanda causes more harm than good in this case), it is possible to discuss the forged land deed with her:

If you pickpocket the land deed off her after giving it to her, and then once again mention it to her, she says:

If you mention the deed to her after you have completed this quest, she will be rather displeased with you:

And finally, if you mention the deed to her while you have it in your possession and while being the Grandmaster of House Hlaalu, she will try and shift the blame onto one of her employees:

In order to become the Hortator of House Hlaalu, you will have to obtain Velanda Omani's support:

Clearly, you have to deal with Orvas Dren in order to get Velanda Omani's vote. If you persuade Dren to support you (either in this quest or in the quest Dealing with Orvas Dren), she lends you her support:

And similarly, if you kill Orvas Dren, she will seemingly be too intimidated by you to continue hindering you (note that in this case, she continues to use her default greeting instead of the one directly above):

If you mention the topic again after she has confirmed you as Hlaalu Hortator, she says:

And if you do so again after all the other councilors have cast their vote for you as well, she says:

After you have received the Belt of the Hortator from Crassius Curio, she has the following to say:

Unfortunately, if you kill Crassius Curio, Dram Bero or Nevena Ules, she will under no circumstances agree to confirm you as Hlaalu Hortator:

Velanda Omani is one of the three Hlaalu councilors with whom you can share the location of the Vassir-Didanat ebony mine:

Mentioning the mine again after you tell her about its location prompts her to say:

Alternatively, if you choose to tell one of her peers about the mine and subsequently mention it to her, she will express her disappointment with your decision: