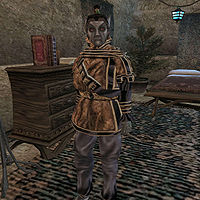 Dram Bero is a Dark Elf noble and a councilor of Great House Hlaalu. Highly reclusive but also shrewd and diplomatic, he can be found hidden behind a locked (50) door in the lower levels of the Haunted Manor in the Plaza in St. Olms Canton in Vivec. He apparently distrusts fellow councilor Nevena Ules, seemingly preferring to ally himself with Crassius Curio. As such, he is seemingly one of the more progressive and least corrupt of the Hlaalu leaders. Bero holds a high standard for the House, shunning petty thuggery and murder, as reinforced in his book Grasping Fortune, an introduction to House Hlaalu. He wears an extravagant shirt with matching belt, pants, and shoes. Aside from his natural resistance to fire and the sanctuary provided by his ancestors, he knows no spells.

Once you have located Dram Bero in his house, getting him to confirm you as Hortator of House Hlaalu is a simple matter (unless you have murdered any of his fellow councilors but Yngling Half-Troll, that is):

If you speak with him again after he has agreed to vote for you as the Hlaalu Hortator, he says:

Mentioning the topic again after you have gathered the support of the remaining councilors prompts him to say:

And finally, after you have accepted the Belt of the Hortator from Crassius Curio, his greeting changes to

Getting Dram Bero to support you on the Council is a tad more involved than getting him to recognize you as the Hlaalu Hortator:

Regardless of which of the two above cases is applicable, the responses that are available to you are the same:

If you mention the topic again before you have defeated Garding the Bold, he says:

Even though he will support you regardless of how you handled Garding in the Arena, he will be far more pleased with you if you spared the Nord's life:

If you speak with him again after he has agreed to lend you his support, he says:

Unfortunately, if you kill Garding the Bold outside of the Arena, then Dram Bero will be too upset with you to lend you his support:

And finally, if you happen to be expelled from House Hlaalu while you try to do this quest, Dram Bero will say:

Dram Bero is one of three Hlaalu councilors to whom you can report the location of the Vassir-Didanat ebony mine after you rediscover it:

If you mention the mine again after you have shared its location with him, he says:

Unfortunately, you won't receive a reward from Dram Bero if you have already shared the mine's location with either of the two other candidates (neither of whom rewards you nearly as well as he does):