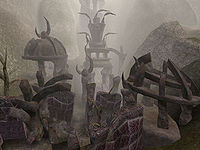 Maelkashishi is a shrine to Sheogorath to the west of Maar Gan. It stands in the West Gash, on the border with the Ashlands, west and a bit north of Maar Gan and roughly southeast of Ald Velothi. 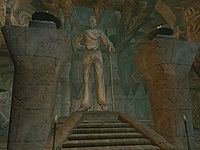 Interior view of the shrine

There are four worshippers in the first chamber, three on the main floor and a fourth on the ledges above Sheogorath's statue. Only three of them will attack on sight, the fourth, an Orc called Bulfim gra-Shugarz, is diseased and won't be hostile: you might be here on a Temple quest to cure her of Ash-Chancre. On the altar to Sheogorath there are a few offerings: one diamond, one cursed emerald, and a potion. On top of the third rising pillar on the right (the one with the burning flame on it) there is a grand soul gem that you can reach with a levitation spell. On the table behind the altar you can find some scrolls and potions along with a grand soul gem filled with a Bonelord's soul. If you stand in front of the table and turn around, you will see two locked chests in small alcoves under the platform that holds Sheogorath's statue.

The Forgotten Galleries can be accessed via a door on the ledges above the statue or through an entrance in the West Gash in the tower above the rest of the ruins. There are three Daedra here, and several pieces of notable loot. The Falensarano Propylon Index can be found on a high nook here, next to a scroll, eight Daedric arrows, and a Daedric long bow. If you exit or enter the shrine via its highest doorway, there is a ninth Daedric arrow on the floor just in front of the door. There are also two more on one of the pillars near the ninth arrow. These two are shot into the pillar's face, facing out over the ledge.

The agent Depusanis Denian provides medium training service in Speechcraft, Light Armor, and Sneak if he is snuck up on or calmed.

Lloden Tenim carries a Glass War Axe, one of only a few available in Vvardenfell. Depusanis Denian is carrying a random leveled short blade, and Horulia Jannus is armed with a random leveled long blade.