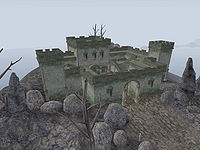 Siege at Firemoth is an official plugin that adds a small island chain southwest of Seyda Neen, and a small quest involving taking out a large army of skeletons. Unlike most areas in the game, this place is very combat-oriented—you may find yourself facing dozens of enemies at one time. At the end, you will face Grurn, the leader of the island's undead, and a powerful lich to boot. You will be rewarded with the Ward of Akavir, a shield with a constant effect Fortify Luck enchantment.

"The island fortress of Firemoth was taken by the skeleton army of Grurn years ago. It's time to take it back. Sellus Gravius, Captain of the Seyda Neen Census and Excise Office, hires you to lead a band of adventurers to the Fort." —Official Summary

Only one new item is included with this plugin. The Ward of Akavir resembles an Imperial Dragon Scale Shield.