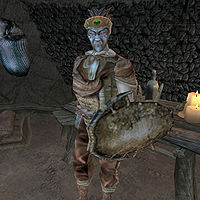 Kaushad, a Dark Elf champion, is the Ashkhan for the Zainab Ashlanders. Kaushad can be found in his yurt at the Zainab Camp in the Grazelands Region. Unlike the other Ashkhans, he cares far less of etiquette within his camp, and also maintains significantly stronger connections to the more civilized peoples of Vvardenfell. He is far more intelligent than the Wise Woman of his tribe realizes. He also seems to appreciate having a clever Nerevarine. Kaushad wears a brawler's belt, an expensive shirt, common shoes, expensive pants, a bonemold shield and an amulet of shield. He carries a chitin war axe. Aside from his natural resistance to fire and the sanctuary provided by his ancestors, he knows no spells.

As part of the Main Quest, Kaushad asks you prove that you are worthy of his attention by killing a vampire who has taken up residence in the nearby Nerano Ancestral Tomb. After you dispose of the vampire, Kaushad will ask you to find him a high-born Telvanni bride before he will grant you the title of Zainab Nerevarine.

If you have never met him before embarking on becoming the Zainab Nerevarine, he greets you with skepticism:

If you ask him about being named Nerevarine, it's very clear he doesn't take the prophecies seriously:

"Disposed" is a hint that you need to raise his disposition somehow. The Zainab's Wise Woman, Sonummu Zabamat, will suggest appealing to his vanity by giving him some exquisite shoes. Should you decide to go with this route:

Once you have his disposition high enough, he still has his doubts, but now he is willing to give you an opportunity to prove yourself:

You can ask him about vampires in general and Calvario in particular and request directions to the Nerano Ancestral Tomb. You can also talk to him about the task again, though not without him playfully chiding you as forgetful:

After Calvario is taken care of, he'll be happy to name you Zainab Nerevarine--provided you give him a gift. And not just any gift...

Once you bring him his future wife Falura Llervu, he finally proclaims you Zainab Nerevarine and hands you the Thong of Zainab:

After being declared Zainab Nerevarine, should you talk to Falura about my bridegroom and then talk to Kaushad about his Telvanni bride, he reveals that's he's fully aware that his wife is not actually a Telvanni noble. He's not mad about it though--far from it. He even gives you a wedding gift:

After completing The Citadels of the Sixth House, you can return to the ashkhan to hear his reaction to your victory.

Meeting with a Wise WomanEdit

Kaushad is not interested in arranging a meeting, for he feels there are more pressing matters at hand.