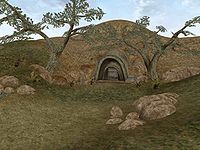 Nerano Ancestral Tomb is a small tomb west of Tel Vos in the Grazelands.

The door faces to the west and is flanked by a pair of trees. This tomb has been taken over by the vampire Calvario and his undead servants (defeating them is a necessary part of the main quest unless you decide to bypass the fourth and fifth trials). There are a few corpses around; Moris has a key to a locked chest and Ursine has a key to the three 100 pts. locks in Indaren Ancestral Tomb. Loot consists of a potion, a few ingredients, a note from Bakarak, and a copy of Ransom of Zarek.

There are two known members of the Nerano family: 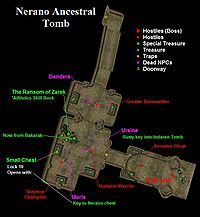