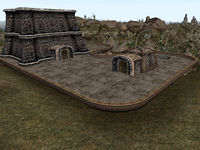 Berandas is a Dunmer stronghold with an extensive cave system. It is one of the ancient strongholds of a brighter time for the Dunmer. The stronghold is in the West Gash, south of Gnisis and east of Koal Cave.

The strongholds seem interesting to the traveler but should be approached very carefully. They have largely been abandoned, but have since proved attractive to whatever group feels strong enough to hold them. At last report, Berandas has been taken over by mostly lesser Daedra who have tunneled into the land deep below the stronghold. Two rats can be encountered on the top level, and a few lesser Daedra are located in the bottom level. Five lesser Daedra can be encountered in the underground tunnels, and two winged twilights guard the last room where the Boots of the Apostle can be found on a dead hero.

Berandas has a functioning Propylon Chamber linking to Falasmaryon and Andasreth. 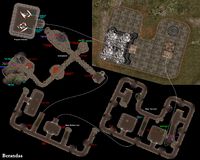