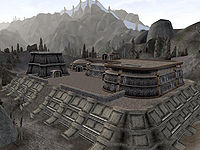 Falasmaryon is a stronghold deep in the northern Ashlands, across the Foyada Bani-Dad from Maar Gan. It is one of the few strongholds with a sewer system.

The strongholds seem interesting to the traveler but should be approached very carefully. They have largely been abandoned, but have since generally proved attractive to whatever group feels strong enough to hold them. At last report, Falasmaryon has been taken over by the Sixth House. Within you will find all sorts of ash creatures and three Dagoths, Dagoth Ganel, Dagoth Mulyn (in the Sewers), and Dagoth Tanis.

The only other resident is the Master Trainer of Marksman, Missun Akin, who has taken up residence in a hut on top of the stronghold. In addition to Marksman, Akin offers major training in Athletics and Long Blade.

Falasmaryon has a propylon chamber linking to Valenvaryon and Berandas.