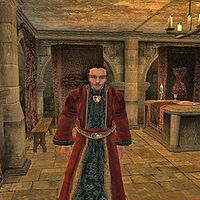 Aunius Autrus is an Imperial priest who sells ingredients, potions, spells, and spellmaking services to all who need them at the Imperial Shrine in Wolverine Hall near Sadrith Mora. He is a restocking vendor of the following ingredients: Ash Yam, Bloat, Gravedust, Guar Hide, Netch Leather, Scamp Skin and Scrib Jerky.

He wears an expensive robe with matching shoes. He also carries a wooden staff of chastening.

Aunius has the following spells available for sale: